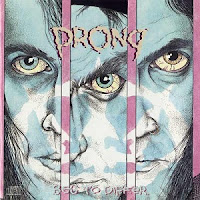 If Force Fed had a vibe that channeled the filth, detritus, and decay of dense urban existence, on a street or subterranean level, then Beg to Differ was quite the opposite, with a polished, corporate, clinical feel to it that was quite a slap in the face when I first heard it. Not to say that the two albums don't share the same thrashing DNA, but apart from the few connecting tissues like Tommy Victor's vocals and a few of the guitar patterns with his patented pinch and squeal, they could have been two different bands and I would have been none the wiser. This was yet another example of how Prong really felt out its first decade with some steady shifts in style and production, while somehow maintaining its core attitude; a band that was able to modernize itself through changing times without in my opinion really dumbing itself down too much...unless you thought it was all dumb to begin with, then touche.

Guided by its iconic Pushead image, this record marked the band's major label signing to Epic, which likely had something to do with the cleaning up of their sound. This one's slick and accessible, rather than rollicking in the grating, grimy crunch and atmosphere of its predecessor. I reckon this was considered a bit of a 'thinking man's' thrash album at the time, at least among other fans I knew, not because it was highly technical or challenging, but because it honed in on a stricter sense of groove and rhythm, almost subliminal patterns emerging through the compartmental thrashing in tunes like the title track, and its extremely simple but effective riffing; the mellow chugs of "Your Fear" which lift into that great little guitar lick behind Tommy's vocals in the verses; the great "Intermenstrual, D.S.B" which at times reminded me the most of an instrumental that would have fit right in with Force Fed if only it were noisier; or the almost mantra-inducing creep of "Prime Cut", which is one of my favorite tracks in the band's catalog. In addition to his really interesting guitars, Victor also expands himself here as a vocalist with some more subdued whispers, a slightly more melodic tint to his inflection, although there are plenty of the good old grunts here to maintain the aggression.

There are still some fist-pumping thrash anthems here, like the opener "For Dear Life", but even there this new direction is apparent in some of the vocalizations and rhythmic choices. The other 2/3rds of the tiro, Kirkland and Parsons, sounded great here also, again...not too flashily proficient, but the solid bass tone and almost tribal fills and rhythms make the perfect accompaniment to the thin punch of the guitar tone and the bluntness of the vocals. A couple of transitions here or there feel a bit jarring and just seem like a rush to get a new riff going, but honestly the whole album is consistent in that there's rarely a track where some progression didn't get my lustrous teenage locks flailing around in the air, and I still feel the push and pull of its mechanisms in follically challenged geezerhood. The lyrics and minimalist but insightful, often abstracting away from their subject matter where other Eastern Seaboard thrashers of this age were hitting things right on the nose (you don't accuse Nuclear Assault or Overkill of any subtlety). In truth Beg to Differ is just as distinct as the debut, if not quite as excellent, and it's still a great example of a band trying to write its own language out of a musical trend; not to the extent of a Voivod, but certainly in that ballpark of distinctiveness. It's also the establishing shot for their more mechanical albums to come through the 90s.