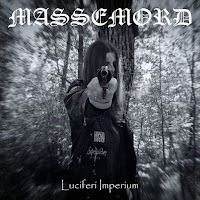 Initially, the Norwegian Massemord wasn't a band I spent much time hunting down, partially because of their general obscurity and probably also because I was more enamored with what I had heard of the Polish band with the same name. Through the years, as I've gone back to revisit their backlog, I've grown to appreciate a few of their records, particularly the 2003 full-length debut Skogen kaller; some well-written, appreciably enough atmospheric black metal. A couple countries and lineups later, the group is still out there, ready to make whatever statement a black metal band can with a cool pic of a battle jacketed hesher in a humble amount of corpse paint and a pistol pointed straight in your fucking face.

And I have to say, the charms and wiles of Luciferi Imperium are just as direct...slower to mid paced black metal which is just as true to its own history as it is to a lot of what some purists demand from the genre, with few to no outside influences or cross-pollination. Sometime's that enough, and as I crank up the album though my PC speakers, the mix of melancholic and evil chord patterns and the raw, wartorn rasp of Sicarius help carry this one towards appreciation. There's little sense of nuance or surprised through any of the tracks, nor are there any sorts of riffs that you won't have heard a thousand times in the past if you've ever deep-dived into this genre, but the album is dynamic and humble enough that I didn't really feel the loss. The beats can get a little brazen and loud, like some of the percussive breaks in "Inri", but the rest of the mix is level and effective at making you feel like you're being stalked through the woodland by such a maniac. I especially like the vocals on this, the slightly sloppy syllabic delivery really drives the whole thing home as a love letter to its medium.

I've probably got hundreds or thousands of these mid-list black metal records lying around in my CD piles or promo folders, but there's just something timeless about the style, that when performed to a degree of competence, doesn't fail me. There were stretches of the album where it felt too creatively dry to hold my attention, but then I readjusted expectations and got drawn back into its riff patterns. The album doesn't really ever threaten to bore you since it's barely over a half-hour in length. If I were to make a more specific comparison, it reminds me of Carpathian Forest circa 1998-2003, but not quite as memorable in either the guitars, drums or vocal departments. It's definitely better than a couple of the other Massemord records in the past, though I think the debut still has the most appeal. Those who aren't already settled in with their old 90s black metal records from this scene might at least catch a whiff of semi-stale nostalgia, burning wood for the past when music like this was considered dangerous and exciting...although the compositions themselves aren't terribly so.