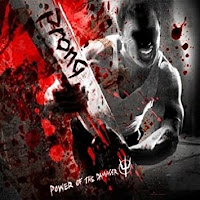 Power of the Damager is by no means one of the highlights of the Prong discography, and it's nowhere near as distinct as the albums they were churning out through the 90s, but compared to Scorpio Rising before it, I had the sense that a metro commuter rail which had nearly fallen off its tracks had suddenly righted itself and then proceeded to the next station with few casualties. This album might best be described as the band's return to thrash, although it doesn't abandon any of the influences that had shaped Victor's songwriting in the previous decade. Another way to look at it is that's it quite similar to a record like Cleansing, only with most of the industrial bells & whistles removed for a more straightforward, street brawl structure that would more closely resemble how it was going to feel at a live event. Stylistically, also directly sets up the streak of albums to follow it, thankfully an era in which the group would get its groove back and no longer teeter on the brink of embarrassment.

This one comes out swinging, with a pair of punchy thrashers which actually deliver a small dose of NYHC in their chord constructions, while maintaining the pinches and squeals Tommy is so fond of embellishing his meatier riffs with. They could have opened up a Biohazard gig easily with some of this stuff. The guitars have this really processed, pugilistic feel to them which sound potent, but also can muddle up the rest of the mix. That's actually one of the areas where this one falls short, I just don't love how it sounds, perhaps a bit too bulky and I don't always love how the vocals and guitars drown out the little background melodies or even the drums. Also, there are a couple dumb grooves in tunes like "3rd Option" which by 2007 felt really passe even by meathead mallcore or nu metal standards around the turn of the century. Fortunately these are pretty scarce, and many of the riffs do deliver a modicum of thrashing entertainment, but I feel like a better production on the guitars would have made several of them shine a lot brighter. The rhythm section is as solid as always, but they do have to contend with that bludgeoning as well as a lot of Tommy's angrier brute vocals which have clearly rubbed off a little from Scorpio Rising, just not as awkwardly.

There's an EP worth of decent Prong material here, in particular "Pure Ether" and "Worst of It" which focus more on the balance of heaviness with catchier, melodic chord patterns that remind me of stuff they were doing on Rude Awakening or Cleansing that I liked. These aren't also without production issues, for example Victor's vocals on "Worst of It" sound almost like a badly mixed Mike Muir, but musically they get their point across and I enjoy the blend of thrash and post-hardcore elements. A few others also deliver, but on the whole I think you could erase half this material from existence and nobody would really miss it, possibly not even the band. However, I don't mean to imply that it's at all terrible, whereas Scorpio Rising made me cringe a whole lot just to get at the painfully few tasty bits, this one sees them in regular rotation, only they aren't being served well by the production choices or the weirdly 'blunt' cover artwork. See what I did there?