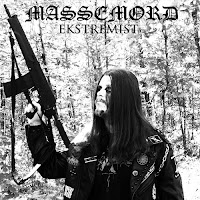 A lot of the details for this new Ekstremist EP from the Massemord international lineup seem familiar from the previous album Luciferi Imperium. Cool looking guy on the black & white cover wielding a firearm, this time a different firearm, against a woodland backdrop, potentially from the same photo shoot, but at a different angle. It makes sense, since this is included with that. And I believe the musical content of this six-track recording mirrors that sense of marginal departure from what came directly before it. This is barking up the exact same true, pure Scandinavian black metal assault with few bells and whistles, excess atmospheric dressings or any real sense of identity that you might be able to pick out of a lineup with so many similar releases across the last 25-30 years that you've been enjoying (or not enjoying the style).

But once more, I didn't care about any of that as I was getting my face hammered in by the material. Ekstremist, as its title might imply, is more intense than its predecessor, with a faster double header to open the album in "Behead the Prophet" and "Enslaved by Darkness". The material here still reminds me of Carpathian Forest, whether its blasting away, or especially the potent mid-paced numbers like the early verses of "The Chosen Ones", but the majority of the EP is fast and loud and a lot of fun, in particular "Ekstremist" with its thrashy, evil breakdown, impulsive, mean rhythm guitars, and a great lead section, not to mention gruesome rasped mentions of "Satan...." which will have you smiling ear to wicked ear and trying to keep your serpent tongue from lolling out of your mouth. It's all mixed loudly and brashly and doesn't give a damn, and in my opinion the experience is better for it.

The only downside is that the last two tracks are demo versions of pieces off the previous album, "Serpent" and "Chaos Within You", and for me this felt like a bit of filler, as they don't noticeably enhance the quality of the demo overall and seem a little redundant despite the differences in their production. Not a big deal, especially if you're getting it all in the same package anyway, but I did think the first four tunes were superior and gave me a much harder kick in the nethers. Overall, what I said about Luciferi Imperium still applies...if you haven't had enough of the originators in this style, if you can pull your attention away from the various progressions and evolutions that other artists have undergone, or if you think all of that should be melted to slag anyway, then there might be a place for nowadays Massemord in your collection. I think there's room for it all, and I think the energy and passion these guys obviously have for such a straightforward style shines through.