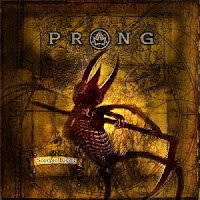 I don't think there's any question that Prong was already flirting with groove and nu metal on their 90s albums like Cleansing or Rude Awakening, and they were possibly even an influence on a few of the bands in that style; but Scorpio Rising was the first unfortunate instance in which they themselves started to adopt the style to the point where it felt intrusive and distracting, like they were trying to bring on some of those more modern influence and in the process dumbing down their own unique aesthetics. This was not as shocking, or as awful as, say, Diabolus in Musica, because Tommy Victor and friends eased us into this evolution It's not quite the disaster that some of the bigger metal bands ran into as they were trying to court an even more mainstream audience, but it IS bad, the worst Prong album in the discography and remains awkward to listen to even today.

The riffs here are mostly big, dumb groove metal riffs, not the first they've written, but they don't really stand out as other than flexing some muscle in a niche that had already gotten annoying and tired even by the early 21st century. They still have some nods to their industrial/thrash era as in "All Knowing Force", but even then those aren't as good as "Snap Your Fingers, Snap Your Neck" and a few come across as just bad Ministry wannabe progressions. The bass playing is still quite pumping and fun, but when you haven't really got any good riffs to play under it also eventually dips into the inevitable mediocrity. The drumming is fine in that groovy hip hop style with some occasional industrial programming embellishments, but by far the biggest offender on the album are the vocals of Tommy Victor. Sure, they still sound like he always has, but he adds in these over the top gorilla grunts to his already gruff style and it ends up sounding too moronic to take seriously. On a track like "Embrace the Depth" he's back to himself and it doesn't sound so bad, he can surge into one of those catchier chorus parts, but there are other times here where I nearly had to shut off the album it was just so goofy sounding. A few of his howls even sound like an angrier, burlier Glen Danzig, so it seems like the other, bigger bands Victor had played with (or would play with) rubbed off here, and the lyrics are largely awful...

I can't completely decimate this album, because about 30-40% of it sounds like the band did in the decade prior, but apart from a few of those splashes of more warm, melodic chords, the bass lines and a few of the chorus vocals, this is just weak. The better songs like "Assurances" and "Out of This Realm" are wedged pretty deeply into the album, but they wouldn't be enough to save it even if they were the first two in the track list. Maybe it was all that time off, Tommy was just trying to rekindle the flames of what Prong was prior, but mix in a few flavors of the week, a process that clearly worked in the previous decade but just falls apart here. At its best, Scorpio Rising is just lazily copying previous material, but at its worst it's unintentionally hilarious. Not the sort of career nadir I'd want to run over with my car like Load or Virtual XI, but this album just seems so unnecessary in retrospect, since they've done a pretty decent job with most of their other output. Even the cover artwork on this one left something to be desired. Is that a skeleton with a beetle head wielding a scythe? What the fuck does that have to do with anything?