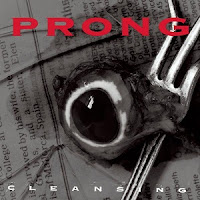 I don't think you could listen through albums like Beg to Differ and Prove You Wrong and NOT think Tommy Victor had a fascination with industrial or electronic music. While those were organic thrash manifestations for the most part, there was clearly an undercurrent of clinical, machine-like riffing, beats and production which made an album like Cleansing almost inevitable. But it's not until this 1994 effort that Prong embarked on a more even split between its thrashing roots and the electronic experimentation; I'm of course excluding the remix EP from a couple years prior which was an abomination. What I'm most impressed with, is that rather than merely aping the flavors of the day, such as Ministry, who were enjoying massive success due to Psalm 69 and steady touring, they made something of their own out of this stylistic crossbreeding. Not to say that there aren't a couple riffs here, as in "Whose Fist is This Anyway?", which Alain Jourgensen might have penned himself, but this one manages to stand out and even outlive a lot of other US industrial rock bands why fell by the wayside somewhere around the late 90s when emo and nu-metal started to bifurcate their projected audiences.

What really surprises me is just how laid back this record is. Similar to Beg to Differ it's exceedingly simple and subliminal in how it's constructed. While there are programmed beats occasionally, they were still leaning on Ted Parsons for the actual drumming, and he sets up a well-produced set of grooves here that give all the guitars, samples, and pluggy little bass-lines room to work upon the listener's expectations. The rhythm guitars are extremely minimal patterns, but even where they feel familiar there is something refreshing about how they serve the overall aesthetic of the album. The tone is punchy and processed, but works equally well whether Victor is cycling through some of his basic palm mutings or the more expressive, dissonant, often warm open chords that are used to detail out some of the verses and choruses. Tracks like "Another Worldly Device" and "Cut-Rate" are still heavily rooted in the thrash we'd come to expect, but the band really stretches itself out with things like the funky guitar line in "Broken Peace" or "Not of This Earth", which twists a riff similar to "Hell If I Could" from Prove You Wrong into something that almost sounds like a darker Jane's Addiction. Another interesting piece was "Home Rule" which reminded me a lot of Voivod with its jarring, wonderful chord progressions and the swerving bass grooves.

Of course, this is all brought into the Prong stable by Tommy Victor's blunt voice, which connects this all to their greater body of work, and fits in really well with the mechanistic blueprints whether he's going straight at the mic or putting a little industrial filtering on their. What further thrusts this into that genre is the liberal use of sampling that sits just behind the main instruments and vocals, almost as if its afraid to truly intrude, but loud enough to matter when categorizing Cleansing. There are political/authoritarian rants, crowd chants, and machine noises in there, all adding to the sonic palette without detracting or distracting. I can't actually pick out a weak track in the bunch...perhaps there are a couple overly repetitive passages on the album, or a few groove metal licks that are a little too generic in retrospect, but this one manages to fill out nearly an entire hour and maintain its consistency and immersion, all the way to the catchy but mellowed thrashing throughout "Test". I've mentioned that the album felt 'laid back' to me, but I don't want that to imply that it lacks energy; it's aggression is simply focused on the robotic nature of its rhythms, the tautness of the lower end guitars that is counterbalanced by the delicious processed open chords which appear later.

Even within this small microcosm of Prong's sound there is a good dynamic balance which leaves me with a fulfilling impression for one of my favorite albums in their whole 30+ year history. This was also the hottest I think the band had ever been thanks largely to the MTV video rotation for "Snap Your Fingers, Snap Your Neck", which was also lampooned on Beavis & Butt-head. And deservedly so...this was a still a band hungry to explore what it could achieve, never balking at stretching its parameters and as a result we've got about a decade of quality albums which build upon their predecessors in interesting ways. For me, the streak didn't end here.