Tribulation - Waiting for the Death Blow (2015) 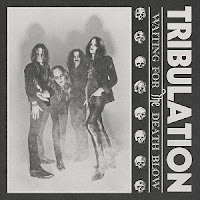 Identical to my approach towards Tribulation's prior single, The Death & Rebirth of..., released in early 2015 before Children of the Night dropped, I was only interested in Waiting for the Death Blow for one reason alone...the Swedes' cover of "One Hundred Years" by Gothic heads of state The Cure. Now, this single is actually comprised of TWO covers, the other being "Pay the Man" by the pop punk sensations The Offspring, but I had already heard that from the Melancholic EP in 2016, on which it was repressed. It was a strange choice, to be sure, but probably one of the Californians' least obnoxious tunes, and I'd say that its transformation into moody, melodic deathpunk metal probably raised its stock with me, but if I compare it to any of the original Tribulation material, in ANY of their stylistic eras, then it falls short of the mark.

On the other hand, "One Hundred Years" is closer to a stunner, capturing the mood of the original but also twisting it into something more appropriate for the cult, black & white horror nightscapes that the Swedes have become known for these last several years. This is Jack the Ripper and Vlad Dracula taking tea in some dingy corner pub while gleefully swapping tales of victimization. The vocals are a little overloud, moreso even than the complaints I occasionally read about their growling in general, and the bass guitar doesn't quite have the same presence as in The Cure version on Pornography. But the atmospherics conjured up by the guitars and steady shuffle of the kit are wonderful, and the lyrics, which contribute the title of the single, still haunt as they did coming out of Robert Smith's quivering wails. So this one is well worth a listen, and guess what...if you're smart, and not me, you can pick this up alongside "Laudanum Dreams" from the last single I covered, on the digipak version of Children of the Night through Century Media. Waiting for the Death Blow itself is unnecessary unless you've committed to collecting just about everything. Cool cover pic though.