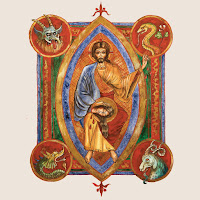 It seems like any and all bands associated in any way, past, present or future with the great Negative Plane infer some sort of inherent quality, even being as stylistically widespread as they are. From Occultation to Funereal Presence, you're getting some damned compelling material. New York's Spite might only share a brief, live connection with the above, but having also heard Salpsan's other project Horns & Hooves I was already aware the guy could brew some nasty black metal extract, and I am not at all let down by this slightly older project, seeing its first full-length through the esteemed Invictus Productions. Like Horns & Hooves, this carries a heavy influence from traditional black metal, but where that outlet little more frilly and speed-metal laced, Antimoshiac is perhaps a more direct line to the wretched sounds of forebears like Mayhem and Bathory in their 80s youth, with just the one musician rasping and playing all the instruments.

Not a lot of material here could be described as unique or nuanced in structure, but the surprise to me is that we've still got guys who can make such familiar patterns feel so cruel and fresh again, and that's really where this album works so well. The range is between mid and slightly faster black metal, driven heavily by dire tremolo picked melody, occasionally slathered in atmosphere from the higher strings being strung above the thundering drum kit. There's not a tune on the album that does not at some point sound exceedingly evil, and that's quite a feat in an age where we've heard it all so many bloody times that it's become almost mundane. Spite songs have vile verses that manage to escalate into more heightened 'chorus' like sequences where they just ramp up the majestic, melodic progressions that seem to climax alongside the snarling. Another key here is the sheer variety of what he's meting out, with no two songs that sound quite the same...the intricate little muted melodies that slink over the hammering bass-line depths of "The Shield of Abraham" sound little like the straight, venom spitting "Vision of the Merkabah" or the slower, steadily storming "False Magic" which could have been right at home in late 80s Bathory. No boredom through repetition whatsoever.

The production helps a lot, which I would consider perfect to go along with this very specific sound that Salpsan has devised. It's not your average necro-rawness, which many bands who chase this style thrive on. Instead, this is richer; fulfilling but not heavily processed or over-polished, never detracting from the constant vibe you get that a serpent is writhing up your shoulder and whispering ideas in your ear. Bass is sufficiently corpulent to support the rhythm guitars, which very often break away from thicker wall-of-sound chords and focus instead on classic, evil lines. I'd say these tremolo picked parts also draw some of their inspiration from ancient death metal circa the late 80s, they just have that ominous confidence to them, and some of the vocals get a little more gruesome to help accommodate this. This is ultimately a well constructed effort that reminds me so often of why I got into this style of music in the first place, and while you're not going to hear an evolution for the form, such could easily be achieved with a few dissonant tweaks, a few unexpected chords woven into the more conventional choices, a fraction more atmosphere. As it stands, though, Antimoshiac is a sinister delight on its own, and Salpsan's finest studio blasphemy to date.