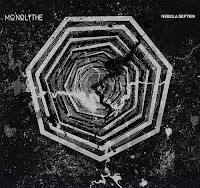 Seven minstrels. Seven tracks. Seven minutes a piece. Seven tones. Seven letters of the alphabet to start the song titles. Nebula Septem. One might ascertain that there was something unusual and 'celestial' about the structure that doom mavens Monolithe have adopted for their... seventh album (of course), but that's not the only quirk that went into this piece. Nebula is quite likely their most dynamic and musical expression in terms of how much effort went into the riff building and melodic execution, and a lot of that has to do with how they've gradually evolved away from their excessively long in the tooth roots. A quartet of 50+ minute uni-track albums gave way to more digestible, but still chunky 15-minute triads on their last pair of albums Epsilon Aurigae and Zeta Reticuli, and now they've cut even those down in half. The consistency of mathematical patterns in their output almost seems to be building some cosmic convergence, some formula that might be hidden to us all until its two late and their deathly Franco doom cracks the heavens and replaces the oxygen of our atmosphere with pure chemical despair.

In the meantime, they've written a damn fine record, which I don't have a hell of a lot to compare to; busily shifting tectonic chord patterns glazed over with immediate and often desperate harmonies, with some fundamental rhythmic variations in cuts like "Anechoic Aberration" that leave me with a prog death impression not unlike the one Dan Swanö put together for his solo album Moontower, only not so busy, nor heavily reliant on the Moog organ sounds. Here the synthesizers peel off into the atmospherics created by the guitar melodies, to give an almost aurora-like counterbalance to the drudgery below, Rémi Brochard's guttural bellows creating just the right amount of sustain to emulate what must be the ultimate 'death metal vocalist floating through space...only you can hear him' sort of ambiance, straight to your ears, splattered well on the peak of the instruments without displacing or drowning them off in the vacuum. There's a constant sense of interplanetary tension that courses through the album, which is aesthetically consistent even through the mutation of the chords and the plodding, passionate fills and beats being strewn out terrestrial-like before them. But it's not always the frightening sort...you feel like you're not only seeing celestial bodies contract and collapse, but burst into existence like bright sonorous beacons that dance off across impossible distances.

It's really interesting to me how, even though they're not always paced equally or assembled in the precise same manner, how having each track at the same length creates a cerebral uniformity. I'm sure there is some scientific term for this, but I'm simply not used to it when 99.99% of all the music I absorb is broken up into longer/shorter pieces across albums, interludes and intros and outros and all that jazz. In a way, you could look at this simply as one of their first four records if it were just divided into seven, because the material itself is unquestionably fluid in stylistic decisions and instrumentation. There are only brief segways, usually in track intros like the Tangerine Dream-esque set-ups for "Fathom the Deep" and "Gravity Flood", but even these can be relied upon to rupture into splendorous misery through the growling and power chords. If you're at all enamored with the 'cosmic' in your musical purchases, or you like doom to be accessible and multi-faceted without transplanting its slow-beating, elegaic heart, then I'd say this band has long been a must for your attentions. Nebula Septem is no exception...lavish, professional, exploratory but stable. Perhaps not exceedingly memorable when broken down into its seven constituent parts, but taken as a whole it hits 'experience' level. So check that your suit is sealed, that your water and primary oxygen tanks are filled, that your battery is at full power. All life support go. And climb aboard for a glimpse of the formidable, beautiful beyond. You won't have to keep your arms and legs in the vehicle, there's plenty of room out there to shake them around.