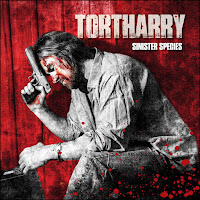 One of the longest surviving European death metal acts to receive what seems like absolutely no attention whatsoever, the Czech Republic's Tortharry have been nonetheless thundering and growling away for well over a quarter century and nine full length albums. Having come across a few of their works in the past, I can understand how they might get lost in the shuffle of far more overt and attention-grabbing brutes, but I certainly enjoyed their 1994 debut When the Memories Are Free as an example of an unsung, classic death metal gem, and efforts like Reborn (2006) or Round Table of Suicide (2008) clearly place them in that camp of beyond competent, aggressive death metal which evolved as a parallel to other acts like Cannibal Corpse, Severe Torture, Malevolent Creation, Deicide, Krabathor, Blood Red Throne, Hate Eternal and Suffocation.

Sinister Species is another check in that box, a balanced attack of blasting mid-90s style death metal with churning and chugging breakdowns which they thankfully keep blisteringly intense and even interesting in some songs, rather than constantly devolving into redundant meathead palm mute patterns. Some of them will no doubt breed familiarity, but Dan Pavlik's Vader-like grunting always maintains a brutal tension that helps almost all the material feel fresher than you having heard it a hundred times. I mean this shit is half meant for you to mosh your fanny off, but it's busy enough that you might actually stop for a few seconds and try to make sense of your bludgeoning environs. They keep a thrashing edge on some of the mid-paced riff progressions, whereas the faster ones will alternate between the chug-and-go patterns so traditional to this niche, and tremolo picked rhythms that hinge on being evil or threatening melodies. The drumming is about as destructive as you want, with good levels across the kit so that the fills are as distinct as the double-bass rolls and blast kick patterns.

One aspect of this band I've long enjoyed are the bass lines of Martin 'Lemy' Vacek, which throb between a big, fat, deep groove and then some higher pitched fills or lines that twist away from just pure rhythm guitar emulation. His presence continues to contribute character to what might otherwise border on run of the mill material, and thus Sinister Species feels as if its been fleshed out far more than other, average entries into this category. That's not to say the record is incredibly memorable, but they put a lot of effort into the verses and bridges so that you'll sometimes be dealt a card you didn't expect around some of the blasting, pummeling corners, without ever stretching credibility. There is definitely a sense that Tortharry stays stuck in a time when this particular strain of death metal was considered an apex of the medium, and a lot of the audience have turned towards its more deeply retro or atmospheric mutations, but these guys are totally solid in their execution, and had Sinister Species dropped around 1996 it might even be considered a minor cult classic. Brutal Truth's Kill Trend Suicide had a cooler version of this cover concept, though.