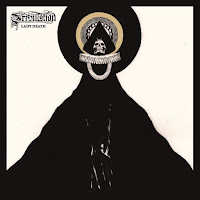 I've already gone on at length about Tribulation's latest album, Down Below, the first case in my opinion in which they've decided to stick around on one particular style and refine it. The results were roughly even with Children of the Night for me, but I've enjoyed both the albums quite a lot when I'm in the mood for an overcast but beautiful admixture of traditional, melodic heavy metal, death metal and the Gothic overtones the band has been obsessed with in both sound and image the last couple outings. "Lady Death" is the third cut on that full-length, opening with an ambient escalation into a downtrodden, mid-paced mope-rocker glazed in great, classic melodic lines that merge very well with the harsher bite of Johannes vocals and the sparser, steady lower chords...a treat for fans of melodic death, Euro-Goth metal, or even Trouble-esque doom metal since a lot of the note choices just put me in a similar mood to much of their material from around 1985-1990.

But, as with the first two entries in this triptych of Tribulation singles I'm reviewing, I had already heard half in advance. The "Lady Death" half. What truly drew me to this short player was the second song, "Skärselden", which I had not been acquainted with. To my surprise, it is not at all a cover or another rock-oriented piece, but instead a 4 minute swell of haunted dark ambiance which feels gloomily cinematic in its scope, cresting at about a minute in, and then again later in the song. Now, as a dark ambient fan in general, I was fairly satisfied with this. Usually I'd like a longer time to get these vibes festering in the shadows of my imagination, but if nothing else its proof Tribulation could have a career on a Cold Meat Industries or some other comparable label, alongside one of their talented ambient countrymen like Raison d'être. That being said, I could see how this would throw off some fans...I mean we don't have much context for this in terms of Tribulation's body of work, and I'm sure a lot of people anticipating Down Below would have preferred a more representative example of their music to whet their appetites alongside the lavish "Lady Death". Mileage is going to vary on this one, but it's probably not the wisest career decision. Nonetheless, in hindsight, the title track is about on par with the rest of their fourth full-length, and the ambient piece is fine for what it is. As to the value of this single? Or this 'EP', as semantics would have it? Not much at all, though the cover of the 7" is eerie, minimalist and classy.