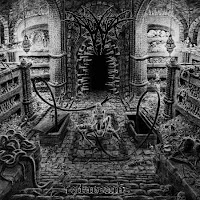 I have to give credit where credit is due, and the cover to the third Atomwinter album, Catacombs, is a total classic, one of my faves thus far in 2018...with its creepy vagina dentata, loads of visceral details, squirming things every where, and some of the longest forked tongues I've ever seen. I mean as disgusting as this place looks, it's one i want to explore, one I want to send my 9th level RPG character to experience, and my hats off to the band for choosing it to represent them. Now it's almost impossible that any death metal record is going to live up to the imagery and mood established by such a cover, and Catacombs assuredly does not, but if this one were released in the mid-90s it would certainly be rated among the classic images we relate to the medium, even with its black & white format. And rightly so.

As for Atomwinter's actual music, they've been around for some years now, helping add Germany to the roster of national scenes that support throwback death metal, and while I've never been terribly impressed by their output, it's archetypal and competent. The same can be said here, for an album that offers no surprises whatsoever, but has quality production, a true old school veneer and still packs enough of a punch that genre diehards looking for their fix probably won't regret checking this one out, even moreso than either 2012's Atomic Death Metal or 2015's Iron Flesh. The clear reference point for me is mid or moderate paced death via the UK or Netherlands scenes, more specifically a mix of Asphyx and Bolt Thrower, with a doomier finale in "Funeral of Flesh" that reminded me a bunch of vintage Autopsy, only more polished. So in general you're dealing with churning guitars, recorded in a tone redolent of the classic Swedish camp, but not quite so overdriven as some. A lot of the riffs border on grind in the same way their influences do, but on the other end they'll splay out some super simplified, sparser chord segments which remind me of the slower Obituary material back in that band's earlier era.

Olle Holzschneider's vocals don't often belt out interesting or nuanced lines, but he does a fair job of keeping them grisly and charismatic, just not to the level of a Martin van Drunen. But they do work really well with this extremely straightforward brand of death. A loud, firm growl over music that is basically built to be cranked. The drumming is tight, the energy hellish, and there were a few points through the album where some genuinely dark, evil riff erupted. They don't work with a tone of leads or melodies, but where they do spit out the former, you'll get something frilly and vibrant that works well above the pummeling undercurrents. The cello intro was also a pretty cool touch, though I would have been thrilled if they actually incorporated this through the meatier tracks, would have made this album instantly something different. And that's kind of where this album falters, as it's just so obvious and familiar throughout the entire run that it gets lost in the memory with so many other midlisters. Just a few less overt choices in chords, a little more dissonance, some stranger chord structures, all would contribute to making a better album than this; but as it stands, Catacombs is not something to scoff at, and if you had a vinyl of this lying around, I'm sure it would draw attention from your creepy (and therefore awesome) friends.