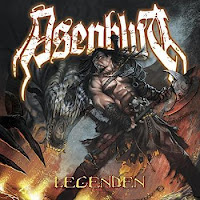 It was always inevitable that the success of a band like Amon Amarth would inspire some imitation, and listening through this German band Asenblut's latest EP, I think we've come across one of the more clear-cut cases, a hurdle that its musical content can't quite seem to leap with enough clearance that you could ignore the forest for the trees. That's not to say that the original material here is incompetent...far from it. If anything, Legenden takes what its Swedish forebears lays out and ramps up the drumming with just a fraction more intensity, but the shifting between those glorious, moody riffs, roiling tremolo picked melodies and verses which are escalated towards a majestic climax sound almost EXACTLY like half the output of their better known influences over the last 15 years. I can't say that there is enough by way of memorable writing that it can stand alongside or even surpass the original article, but at least when it comes to constructing a track with a variety of riffs, leads, and such, tracks like "Die Legende" and their namesake "Asenblut" aren't exactly lazy, in particular if you're a fan of records like Twilight of the Thunder God or With Oden On Our Side.

Now, to be fair, Asenblut have been at it for awhile now, and four of the five tracks here are new recordings lifted from their 2009 debut Aufbruch, which I covered many years ago. Certainly these sound mightier and clearer than those, albeit lacking in novelty as all reworkings of pre-existent material tend to do. But the fifth tune, "God or Man", is a cover of a rarer Manowar track off the Thunder in the Sky EP, and I actually feel that Asenblut did a fantastic job of translating that over directly into their own style. In fact it gives the original a run for its money, and is hands down the catchiest tune on this release, the only one I kept wanting to come back to. Love the melodies, the lead, the grunting and rasping vocals contrasted against the soaring riffs, and it just keeps getting better as it goes along. While it's no surprise that a Manowar cover would be chosen, it was not expected to be the highlight of this release, and adds a bit of value. Otherwise, Legenden would not be a mandatory listen unless you really want newer versions of the Germans' songs from a debut album that they probably think needed the most studio tweaking.