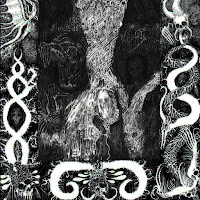 Necrosis Twilight is a promising if marginally flawed entry into the realms of caustic and cavernous Finnish death metal, not entirely reliant upon mimicking its influences, but close enough in countenance that many will lump it in a lot of its peers. I was drawn to this by the creepy band name, the even creepier black & white cover artwork and just the fact that I've been a fan of this stuff going on back to the Demilich, Convulse, Demigod and ancient Sentenced years, and ultimately impressed that this was all put together by a single musician covering all the instruments. The two tracks are admittedly a little bit fattened at a respective 9 and 7 minutes long, and don't possess a gulf of internal variety that really deserves that amount of corpulence, but as an EP it wasn't a case where I really found myself bored, and there isn't an insane amount of repetition, I simply felt that more ambiance or atmospheric breaks would have rounded out the existing, suffocating riff set to make for a more memorable demo.

The vocals are a massive, sustained, often howled guttural in the Craig Pillard vein, where they themselves transmogrify into mostly an atmospheric effect rather than a syllabic labyrinth. The guitars morph between old school, 80s Death-like Floridian evil fluidity, only rawer, and then higher, more melodic sheen tremolo picked breaks that I found were the most interesting. Bass guitars are turbid in the mix, but don't break away from the rhythm guitar patterns all that commonly; where as the drums are a bit of a complaint...functional and frenzied, but often just provide a clamorous backbone to the weight of the riffs, and don't really deviate or impress by themselves. Altogether, though, Blooming Carrions achieves its goal of fearful, morbid, asphyxiating, subterranean escapism. Murk and deep earth and dancing shadows and apparitions. Not so much that it can stick its neck out far from the pack of death metal bands this last decade, who all pursue similar aesthetics, but if you're a big fan of the darker, roiling acts on the Dark Descent roster, or you scour the mortal realm for obscure cassette-death, then I think this is an act to keep an eye on. Or rather an ear, to the muddy convulsions below, which might one day belch this forth like a visceral geyser from the deep underground if a bit more balance and nuance is attained.