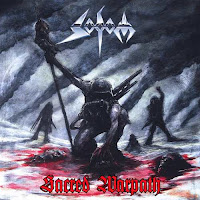 Sacred Warpath is the first of two Sodom EPs that will ultimately go down as a teaser for the forthcoming Decision Day full-length, only this one was released a couple years ago, perhaps without even the intention that it's sole new track would feature prominently in the future. Because of the way it was positioned, it almost feels like more of a tail for Epitome of Torture, a record that was by all means competent but a little limper in the songwriting department than I'd have liked. So expectations for this thing were never crazy high, and to top that all off the remainder of the four tracks is composed entirely of live performances, so there's just nothing else new going on beyond the artwork, which is itself...nothing really new.

Have to say, the title track is a solid one, a mid-paced melodic piece which is moodier than usual, with a lot of warlike rolling drum fills and an atmosphere that made it feel like it could have been some environmental/culturally aware outtake from Nuclear Assault's Handle With Care album. I found Tom's voice here to be exceptionally raspy and brackish, he does reach a little deeper to his normal, gruff bark, but it's kept a lot more bloody and subtly screaming which only adds to the mournful nature of the tune's subject matter. Acoustic guitars and a pure, driving melodic bridge with a dependable lead definitely further the notion that this was meant for a more 'mature' and measured style than "The Saw is the Law" or "Agent Orange", and it's pulled off well enough to spin through it a number of times, and part of me wonders if the Germans were at that time planning for the next album to take Epitome's well-rounded approach to an even more emotional range, but I felt like this particular track was the equal of anything there at least, even if there are no money shot riffs.

The live material is headed off by a spurt of a "Surfin' Bird" cover and then erupts into a neck breaking rendition of "The Saw is the Law", an obvious choice, but there's a bit too much clip and unevenness to the chugging that Tom's bass seems enveloped by the rhythm guitar, and that's a distraction. The production on "City of God" and "Stigmatized" is much the same, but they both feel a little denser and angrier and it ultimately leads to a better reaction, though some of those same flaws in the recording do come through. This is no Mortal Way of Live but it's never a bad thing to hear such a revered, ancient thrashing entity still delivering beatings from a stage. Unfortunately, once "Sacred Warpath" appears on Decision Day there's just not going to be any reason to keep this thing around unless you're a steadfast collector of all things Angel Ripping, so I'll pass on paying it any attention in the future, though it's not an entirely worthless release like so many others of its ilk.