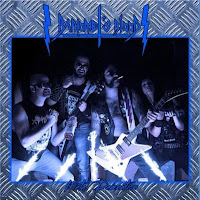 Metal Damnation was yet another step forward for the Italo speed metal gods-in-training Baphomet's Blood, and until recently it would have been the first album I reached for if anyone had ever expressed to me their interest in checking them out. From the grate graphics and blue-fringed photo on the cover to the production of the music itself, strides were being taken in rounding out the band so it became a little more than just an arid expression of ideas that had played themselves out some 25 years before this was set to tape. Structurally, there isn't much of a difference between this and either of its predecessors, it simply sounds better, with rhythm guitar riffs that feel just a fraction more propulsive and powerful than those they had laid out before. While they were already haunting the back roads of the speed metal highway, they had now skidded out onto the main thoroughfare, kicking up lots of dust en route to the next pit stop where they were primed for a barroom brawl.

Searing strikes of a horror score (I can't recount where the sample is from) and then it's off to the race with "Devil's Night", a tune redolent with the scent of old English outfits like Tank who were taking that inner punk by the throat and then layering it with denim, leather, spikes, growing out the hair good and long with handlebar moustache and trading in those Sex Pistols vinyls for some vintage Warfare. There's also a healthy taste of both US and German speed and power metal which help to mold the lead sequences and the brighter overall resonance I came away from this one feeling, like they had found a nice median between old Riot and Motörhead and then sat it down in front of some speakers and blasted an Iron Angel record, which left an indelible impression on the tape itself. The style of riffing really isn't all that removed from the path they were already on, just choppy speed and barking, gruff vocals, but it's just that much more forceful, and the tone of the guitar has a slightly more raw, ripping edge to it that sounds good and crunchy like locusts being ground into the asphalt.

Bass is a little better here, but still tonally the weakest link of the band. The leads are definitely much improved, taking that undefined feel of the older albums into a more explosive, exciting arena. I also like the stops/starts they toss into tunes like "We Don't Care" which give you a nice chance to recharge, round the mountain pass and go charging back to your destiny. The mix of the guitar and vocal is also a lot cooler, as well as the way the songs are set up. There could certainly be more variation...quite a lot of the tempos feel exactly the same, and they're not changing up note patterns noticeably enough to thrill anyone who isn't in the mood for this brand of raunchy speed metal, but it fills runs out its 37 minute fuel tank well appropriate energy and leaves me feeling like the band has finally caught some fire. Just how much? Stay tuned.