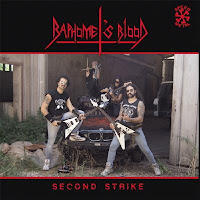 The moody acoustic intro to this sophomore record, and the slow but sure heavy metal buildup that bleeds into the band's namesake anthem definitely gave me impression that the Italians had refined themselves for a greater impact this time around, and in truth I feel that Second Strike is a step up above Satanic Metal Attack in every way, maintaining that roughshod road burn raw production some listeners probably loved about the debut but angling up the actual songwriting ability. This is still throwback material, to a fault, meaning that unless you've got nostalgia for a more testosterone injected alternative to the original NWOBHM scene, namely a band like Tank, 'Head or Venom, this is probably one to avoid, but I can easily relate to this with a skunked beer in my paw and that stinking denim vest I made out of an old dungaree jacket that darkens the bedroom closet for now and evermore.

Basic shit here, pavement worthy anthems with only vague degrees of variation to note selections, which are all cast in that bluesy iron of the old British bands in the late 70s, and slathered in the ugly and lower blue collar vocals of Necrovomiterror, who by his name seems more like a natural fit for a band like Blasphemy...but I'm guessing some of the names these guys used were also a nod to the band Sodom from their heyday. Good, violent thrash metal names, for songs that only faintly dip into the thrash-well, and even then only at that niche's most basal. The drums are little more than brute force, effective but occasionally monotonous, driving clatter that merely fuels the licks, which are themselves far from nuanced but generate a similar vibe to that first time I heard Filth Hounds of Hades or Iron Fist. Solos are sloppy and grungy and again, like having molten blues-based hard rock poured into a fiery forge for smelting into these workmanlike, thundering exercises in sounding EXACTLY like they look on their cover pose.

As with the debut, the bass guitar is fairly lacking in the mix, and the tone doesn't really sound good, a page from the Lemmy handbook must have been ripped out when they were formulating the style and direction they wanted Baphomet's Blood to head towards. So that can make Second Strike feel a little on the dry side, but doesn't completely break the deal for me, because this is just something so 'innocently' vile and straightforward. Every lick on this disc was probably written 20 years or more before it came out, and a lot of bands could probably write this entire album's worth of material in an afternoon; yet there's just something retro and refreshing for me which I value more than innovation on a particular effort like this one. Don't get me wrong, this is FAR from one of the best in this backwards speed metal scene, and even this very band has surpassed it, but if anyone were to be listening to this in their car and picked me up, I wouldn't ask them to turn it off or even turn up my nose at what is such a crude, good time. It makes me wish I smoked cigarettes. I don't, but maybe in some alternate reality my other self does. And he's doing it to Second Strike.