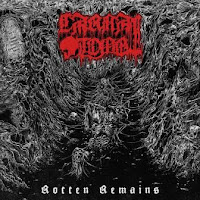 Not content to merely ape the endless hundreds of Swedish death metal retrophiles, Germans Carnal Tomb have used a bit of that style's production as a backbone and then fortified it with raw and pungent elements of ancient Dutch death metal (specifically earlier Asphyx and Pestilence) to create an entertaining hybrid of the genre's roots with a couple unexpected surprised that make for a well-rounded studio debut album. That I had heard nothing of this band in advance also rather stunned me, since I think there's a great level of appeal here for fans of bands like Repugnant or Corrosive Carcass who brandish similar aesthetics, but don't exactly wind up in the same murky graves through their sepulchral expeditions.

It starts with a pretty obvious horror sample that I could live without, and then breaks into one of the more straightforward pieces on the disc, with roiling tremolo picked rhythm guitars that channel a mix of Left Hand Path and Consuming Impulse, with dank growled vocals that hover just at the edge of the din, tangible bass tone and harried drumming with lots of energetic fills...when they burst into the early Bolt Thrower grim future breakdown at the mid-section and then piledrive with the double kick drums it feels pretty satisfying, though it's one of the less interesting pieces here. Forward to a tune like "Cycle of Horror", where you've got all these standalone atmospheric bass lines that sound like they're almost side-tracking into some sort of cemetery swing and then plastering it with morbid harmonies, and again those lesser volume, steady growls which feel like you've come across a low key side conversation at a necromancer convention that you're not meant to hear. Or the pure, driving melodic thunder of "Cemetery Inversion" which reaches a glorious, melodic flow in its own bridge.

All told, Rotten Remains is rather well-balanced between its faster and slower sequences, and thus escapes the boredom I feel from a lot of other bands that are doing little more than recycling what they've got in their record collections from 1993 and earlier. That's not to say Carnal Tomb is all that unique, a lot of their riffing patterns are predictable and not always so catchy or evil sounding, but I think if you dwell on a plane in which efforts like Last One on Earth, Onward to Golgotha, Realm of Chaos, Cause of Death, Fornever Laid to Rest, Scream Bloody Gore and the aforementioned Entombed or Pestilence serve as part of some perverse pantheon, then the Germans have clearly promoted themselves beyond pure acolyte status into the strong arm of the supporting clergy, and they've got just enough of an atmospheric snare, and an ability to assess and take marginal risks that they warrant some further attention. Album looks like it sounds, and it sounds like death fucking metal without any other pretensions than to simply 'get it right'.