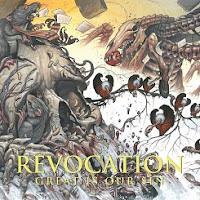 Revocation might be down to only one of its original members these days, but Great Is Our Sin proves, if nothing else, that there is plenty of thrust and momentum left in this Massachusetts engine as it metes out what is honestly the band's tightest and most efficient record since its 2009 sophomore Existence is Futile. As a local to the band's catapulting onto the international extreme metal scene, it's hard to believe that we're already six full-length records deep and touring all over everywhere, but the constantly mutating roster seems up to the task. And all the while, the hybrid style promoted through the songwriting, that of punctual, dynamic death/thrash continues to attempt to refine and own itself. I still don't get a strong sense of 'personality' from the band's records, or Dave's harsher vocals, an aspect that has long plagued me when composing my thoughts of their music...but Great Is Our Sin is strong enough and fun enough in translation that I can put those niggling details on the back burner and just thrash out.

Drummer Ash Pearson, formerly of 3 Inches of Blood, fits effortlessly into Phil Dubois-Coyne's recently vacated chair; and I'm not going to lie to you, as someone who found his prior band's output eye-rollingly mediocre and not remotely funny, I'd say Revocation is a huge step up. His solid and tempered battery of kicks and fills is pure fuel to the taut, semi-complex thrashing patterns dished out by Davidson and Dan Gargiulo, which often erupt into full-bore tremolo picked progressive death metal patterns in total 90s Death fashion. I'm not going to say that these riffs stick 100% of the time, and the album starts off on what is far from one of its stronger numbers, but at the very least I never felt less than compelled to continue exploring throughout, and tunes like "Theater of Horror" and "Communion" had plenty of earworms that I kept wanting to spin repeatedly. Brett Bamberger's bass lines are excellent, especially where they're given room to breathe in the bridges and other passages where the rhythm guitars serve more as a punchy applause for their low-end aerobics. They also pull off a pretty nice instrumental in "The Exaltation", which is simultaneously my favorite stuff on the entire record and their best attempt at this to date.

As for the vocals, which have always felt boilerplate and never interesting, I think either I've just gotten used to their bludgeoning post-Anselmo aesthetic or that Dave simply does a better job here than on most records. The cleans won't be for everyone, channeling some of that modernist rock radio angst people like Burton C. Bell and Devin Townsend first championed, but they are executed with enough taste here that they don't become a detriment to the volatility of structure. Another complaint I might offer is that, as modern and tight-fisted as the production here is, it rarely offers any sort of atmosphere or dynamic conducive to making this album immortal...as fun as I have listening through it, it's not one I'm likely to remember or revisit much by the end of the year. The "Altar of Sacrifice" cover sounds at once both more modern and aggressive and far less vicious and memorable than the original, and just seems like a too-safe icing on the cake, where I'd rather hear the band go after an old tech thrash number or something and make it their own. All told, though, Great is Our Sin is a pretty good record, edging out its predecessor Deathless just so slightly and far more of a tour de force than the middling eponymous disc or the solid, unremarkable Chaos of Forms.