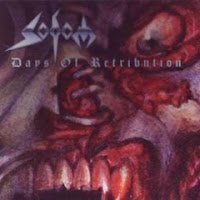 Days of Retribution is a far more qualified herald for Sodom's 15th full-length album Decision Day due to the proximity of its release to that (I'm assuming) anticipated splatter-platter by the legions of disheveled gas-masked ghouls, young and old. A clarion oiled with the blood of innocents and ready to sound off like an airstrike. After all, if the mighty Tom Angelripper is still doing this shit then we're all still young at heart, right? Just run with that. Grab a cold beer. Optionally, a Pepsi. Caffeine not working for you? A vitamin water, then. Whatever it takes to keep the rust off the joints, the RAD meter ticking with the appropriate level of heat and danger, and...fuck it I just really hope this offers me a prayer than the new album is going to whisk me away to that pivotal 1986-1990 era in which this band was one of the most reliable among the German outbreak of the Golden Age.

This is a longer EP than Sacred Warpath, and thankfully does not rely too heavily on its live content, although that does rear its head in the waning moments of the release. "In Retribution" is the new tune you want to hear, and thank fuck it's actually an appreciable scorching of mean and speedy licks that is arguably the best I've heard from them in about a decade. His voice just sounds enormous and raunchy over the force of the rhythm guitars, more focused than emotional as it was on that previous track. It almost sounds like a slightly more modernized take on a tune that would have been ripe for inclusion on the Expurse of Sodomy EP back in '87, and though not as memorable, and far more mature than a "Sodomy and Lust", it delivers a fairly ominous chorus with a wildly looping little melody that comes flying off the rhythm hook. Just an incendiary effort than I could have hoped, and the highlight of this whole release, though their 'Motörhead' section of this EP isn't so shabby either, beginning with the inclusion of the bonus track "Murder One" from their In War and Pieces album, and then busting directly into a cover of "Ace of Spades", which is far too obvious, but let's face it...

This is a band that was HEAVILY inspired by Lemmy in both songwriting and bass playing, so after his untimely passing, there was no chance of something like this being neglected. It's a serviceable send-up, but nothing out of the ordinary. The band then breaks out into a rehash of more songs that have already appeared through their catalog...."Kamikaze Terrorizer" off the eponymous 2006 LP, and "Waterboarding" off Epitome of Torture, and then it dawns on me that this is really just a sampler of Sodom's material from the last decade...the choices are good, of course, but even though some of the recordings might be unfamiliar, it's almost like a micro-compilation, and that stinks. There is yet ANOTHER inclusion of "The Saw is the Law" live, and also "Wachturm", but by then all of my dreams were dash, my hopes deflated, and my Pepsi flat. What started off so great just took a nose dive, but with the caveat that "In Retribution" is a fuckin' grand time and with that and "Sacred Warpath" already planting its hatchet in my brain, I have positive expectations for Sodom in the very near future.