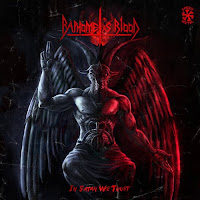 In Satan We Trust is the culmination of everything I've ever wanted out of any of the prior Baphomet's Blood records, to the point that even if some of them are decent, I doubt I'd ever even listen to them again now that I have this in my possession. The Lords of Salem sample inaugurating this speed metal ritual is used more effectively here than it probably was in the movie, and though it might feel like bait for a lawsuit, the orchestration rolls right into the mid-paced, field leveling mosh rhythms before mutating back into the lethal genetics of Venom, Tank, Exciter and Motörhead that were clearly seeded into these members' brains at a vital age. With the obvious caveat that there is little to nothing among these riffs and lyrics that hasn't been done a thousand times in the past, this is thus far the Italians' opus of high speed, angry dirt.

Forceful rhythm guitar patterns here add a lot of meat to the bones of bluesy fills and leads, none of which are super exemplary or incendiary on their own, but all contribute to this roadworthy crusade of hellfire which simply sates that inner, pissed off teenager I was back in the 80s, listening to what tapes I could scrounge up and watching the horror selections available to me on my parents' cable when they thought I was in bed. Baphomet's Blood doesn't fuck around with a huge variety of tempos, in fact the majority of the songs seem to move at the same velocity entirely, so telling them apart becomes a tedious chore, but the pacing and flow of the music itself just becomes an addiction I want sated after the dust from each previous track clears. The rhythm tone is pretty much perfect, potent and fiery, but crisp clear enough to pick out the various tracks and slight nuances in each of their playing. Bass is bombing here, a good tone that is better fitted and more audible than what you'd hear on a lot of their older records. Drums are driven and passionate, and while Necrovomiterror's vocals certainly haven't 'evolved' over time, they just sound continuously more gruff and nasty and honest here...not giving a fuck. And that is to their benefit.

There are, to be honest, a number of generic riffing progressions on this album that are lifted from a gestalt of their influences, and occasionally they flirt with slightly more boring speed/punk phrases that should be thrown in a locker with no combination. But even these, when placed in the fingers of hands that want nothing more than to give the listener and honest, faux-Satanic drubbing which puts them into a sense of nostalgic unconsciousness, are effective enough to contribute. You have to be at rest with the fact that this is not the music of progression or new levels of extremity, but more or less a twisted mirror of the past, so many of these younger acts inserting themselves into a history that they only belonged to as spectators, and offering windows to very specific cross-blends of their forefathers that, frankly, I don't mind existing. I have a soft spot for this sort of unapologetic, grimy speed metal when performed properly, and even though these Italians don't count themselves among the most atmospherically throwback or inspired of the lot, they have continually improved upon each record to the point that I feel they're rock solid reliable and know what they're doing.