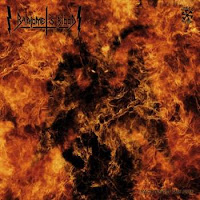 The three original tracks on the Back from the Fire EP don't really advance Baphomet's Blood beyond the material from their third full-length Metal Damnation; in fact they feel like a step sideways and slightly backwards, embracing the cheesier aspects of their speed metal existence. While the band had been escalating its level of engagement and nastiness over the prior half-decade, this might be seen as a slight sign of some stagnation. But, that said, it's a fun enough little romp between proper records, and keeps the band's vital signs active and 'in the game' throughout the seven year gulf between those third and fourth albums.

Solid, if predictable riffs that generally run a similar course until they're cut up into slower, heavy metal pacing and lead sequences. The guitar tone here is roughly in league with Metal Damnation, that is to say superior to the first couple albums, but I found the construction of the rhythm patterns to be slightly less incendiary or exciting. Tunes like "Back from the Fire", with its dextrous opening lick, seem to speculate what it might have been like if Raven in their 80s prime were fronted by Algy Ward's workmanlike, gruff vocal presence, which manifests a lot in Necrovomiterror's timbre, rather than the screaming nasal vocals they were known for. That is certainly my favorite track of the three originals, but even then it's pretty much paint by numbers songwriting which pans out exactly like you think it will as soon as you've experienced the bridge into the first verse. The bass seems to have finally hit the right stride here, with a pluggy little tone always present on the underbelly of the guitar, and the drums sound as tight as ever.

I'm no expert on Italian heavy metal veterans Strana Officina, but I have actually heard a couple of their older releases, including "Metal Brigade", which Baphomet's Blood uses to close out this EP, using actual vocal contributions (i.e. unruly screams) from vocalist 'Bud' Ancillotti himself. The tune is simultaneously the sloppiest and most amusing on the record, with some production differences from the rest that only make it seem a fraction out of place. Still, it's nice that the band pays tribute to someone that most in the world have never heard of, but were certainly some kind of influence on the younger band and possibly the scene that shaped them and peers like Children of Technology. And thanks to the 'exclusivity' of the material on this release, which seems to be a lost art half the time with so many EPs stuffed with live cuts and re-recordings, I'd say that Back from the Fire is not going to disappoint those who know what to expect, and its overall quality is equivalent to at least the band's debut, and even a lot of material from Second Strike. But still a good half decade before they would finally stoke the braziers Satan uses for hookahs.