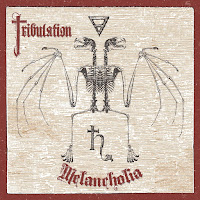 The Melancholia EP is presumably, ideally, a means to stash a bunch of unreleased material somewhere fans can access it while they eagerly await Tribulation's next eclectic transformation on album #4, but an initial scan of its contents does not look wholly promising. You've got the titular cut already released on their last full-length Children of the Night (which I loved, don't get me wrong), two remixes of that track, three demos of other songs from the album, and...an Offspring cover. That's right, an Offspring cover ("Pay the Man"), which was itself fairly expansive and largely uncharacteristic of the band's standard punk rock anthems. If you weren't aware of the song beforehand, however, you might not even realize that this wasn't original, because of that very fact; Tribulation do a decent job with it but I can't actually say it's better than the original even if prefer Johannes' growls to Dexter Holland's irritating high pitched timbre. Still, the fact that they take such an unusual choice and blend it into their most recent aesthetic is pretty interesting, it was far from a throwaway choice.

Some might actually find the demos of "Holy Libations", "Motherhood of God" and "Winds" a little better than their final album counterparts, because they sound a fraction more visceral and raw. I might be on board with that, only beyond that fact there is not a terrible amount of difference with how they ended up. The emotionally resonant, drifting heavy/death moments of the tunes come off the same, though, and they lack the element of surprise when I first experienced them in their polished studio format. I couldn't care less for including the title track like on any cash cow maxi single, so a lot of my interest was directly focused on its remixes. The 'Steingrim' remix is more or less a remaster with different instrumental volumes, but it sounds a little clunky and in no way would I prefer it to the original. Far more of a risk is the Author & Punisher version of the tune, which does actually dissect it down into its components and bake them in a minimalistic trance of hip hop and industrial lite sound forms, keeping the growls intact but making everything else rather hypnotic, to the point that it's the best part of this EP and its only truly redeeming feature, just for the tones the musician is able to produce.

That said, industrial/electronic remixes of metal tunes are old hat, and this isn't exactly more unique or compelling than a lot of what you've heard from bands who used that as their primary style, or more severe experimenters like Ulver, etc. So while I enjoyed this deconstruction a few times as background noise, it wasn't really worth the price of admission for the physical EP. Ultimately, while I didn't hate all the content here, I think I would have much preferred 3-4 new or unreleased tracks over the choices the Swedes made. Maybe tack on the Author & Punisher mix and the Offspring cover as bonus tracks on that, but the fact is it's 2016 and releases like this have very little currency except as prehistoric means to claim a few dollars from the painstakingly loyal audience members. Considering the amount of buzz Tribulation were able to generate with their latest album, and the positive critical reaction to the prior two, it appears they've hit a level where frivolous product like this is possible. Not entirely garbage, and worth listening to once or twice if you care about the band, which I do, having thoroughly enjoyed each of their records for its own reasons. However, I'm far more excited for what their next complete creation/direction will prove, and this was barely even substantial enough as an appetizer. I'd tell the waitress it needed much more seasoning. Bland.