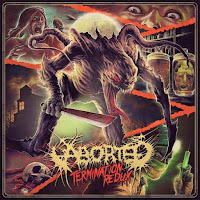 With the exception of a couple albums that succumbed to a bit too much of a -core inspiration, Aborted have maintained a largely consistent career as one of the most visible, productive forces in death metal, touring often and hitting hard with audiences that are impressed by their brutality, balance of technicality, and the high level modern production values they champion on their records. I myself have not felt a strong connection to their songwriting in years, the first three albums (Purity of Perversion, Engineering the Dead and Goremageddon) remaining my favorites, from times well before they had blown up the world over. There have been a few fun cuts since then, in particular on 2012's Global Flatline, and yet despite those 'high' contemporary standards of studio sound and riffing intensity they have set for themselves, I simply don't find much of their material all that absorbing.

It's not for lack of trying, because once the rather lame intro to Termination Redux subsides, they throttle you with scores of riff progressions over the four tracks and 15 minutes that channel everything from death and goregrind to the hook-drenched death-thrashing punch of the mid-era Carcass style that informed a lot of their older albums, as if it were siphoned through the high impact capacity of Napalm Death and the roiling grooves of Morbid Angel. Ceaselessly energetic drumming, brick shitting rhythm guitar tone that bursts directly into your face, and some kind of scientifically calculated ratio of blasts to double bass storms to breakdowns that were certainly plotted as blueprints to entertain both their purist brutal death following and the -core guys that are likely to see them on all manner of tours with their favorite bands. Plenty of intricacy in some of the rhythm guitars, but a topping of growls and rasps that feel 100% risk-less and towing the party line for most modern bands of this niche. The bass lines sound rich, fat and fantastic, whenever the drums and guitars aren't too busy to obscure them, and best used in the little atmospheric, spoken break in "Bound in Acrimony" which is among the more immersive moments on this short-player.

Where Termination Redux really doesn't do much for me is in its faster, blasted deathgrind sequences in which the chords selected, as forceful as they are performed, feel like any other banal band putting together the first 3-4 chords that come to mind and sound passable. The same could be said for the breakdown riffs. The notes here just don't stick to my brain, and I found that some of those more involved, mid-paced patterns were just so much more interesting that I wish they were prevalent over more of the run-time. The mix here is loud and engaging, but also super-clean, and thus nothing you haven't heard a hundred or so times already. The Belgians certainly don't lack for any testosterone, nor do they show any signs of slowing down after their 20+ years, and I think an audience that was heavily into the last two full-lengths (Global Flatline and The Necrotic Manifesto) will chew this right up, but I found only an ephemeral entertainment at best, here and gone in a flash of whirling limbs, a creature of structure and production, empty violence and exhibitional proficiency but not one of any sterner auditory dynamic or substance. You might stab someone in a shower to this today, but you won't be singing it in the shower tomorrow.