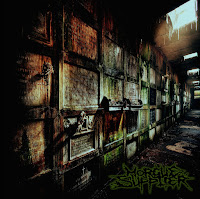 One of the reasons Morgue Supplier is one of the most exciting death/grindcore mutations to explode from the States in the 21st century is the sheer strength of the influences they bring. The acceleration and impact which so define the genre are present in spades, but where many comparable bands like fall a little flat is in the lack of ambition they weave into the songwriting. Sped up hardcore punk riffs I've heard a million times before just aren't going to cut it in 2015, and neither will sounding like a momentary testosterone spasm accompanied by vapid snarling and barking. Granted, this trend had started to shift in recent years with bands like Antigama and the late Gridlink expanding the field through more unique guitars and song structures, but these Chicago area psychopaths mete out a level of energy and disgust so furious and personal on their eponymous sophomore full-length that you feel as if you've actually been punished, something I've rarely attested to this niche since its late 80s birth.

If their name didn't give it away, Morgue Supplier lean more towards the 'death metal' side of that equation, upon a bedrock of Napalm Death-like blasting and chord grooves, only filtered through a more atonal, unusual note progressions, which at times reminds me of both the classic Voivod and perhaps even a little industrial filth redolent of an alt-universe hyperventilated Godflesh. There are all manner of individual riffs here which show roots in anything from tremolo picked OSDM to impious death/thrash to the whipping, dissonant frenzy of noisier American metalcore bands ala Converge or Dillinger Escape Plan, or the brickwork intensity of modern Cryptopsy; but they'll also lay into a death/doom groove or a more atmsopheric segue when it's best to let the audience take a chance to breathe. You get the feeling that absolutely nothing is off the table, provided that it's sick and feeds into this record's self-fulfilling paeans to murder, addiction and social disintegration; and to that extent the album is 14 tracks and 41 minutes of unforgiving hostility that will at the very least put you in stitches, if not a stretcher...which is kind of what the name implies. Polymaths of punishment, tirades of tempo shifting torture that never forgets the importance of having actual guitar riffs to reinforce the abuse.

Vocally Paul Gillis employs a number of attack schematics, from the sustained, grotesque guttural of a Martin van Drunen to the raspier snarls so often associated with this style. But what puts this over the top is the use of more robotic filters on several of the lines that just make it feel all the more angry and inhuman, dystopian and overwhelming. A bad battery acid trip. Mechanical malcontents. Rather than just rattling off syncopated, monotonous lyrical lines like sabers, there is an intense feeling of discomfort and personal pain captured in the ugliness of the expression. Teamed with the fat, pungent bass lines and a rich, bludgeoning guitar tone that measures off both the fury of the chords and the street light shine of the higher pitched, natural dissonance of the strings, there is just so much pressure being applied at almost any point on the album that you feel strangulated, but right when you're about to lose consciousness they'll switch to something a little simpler and let the senses of vertigo and suffocation subside. Anchored by some muscular drumming which coordinates simpler grooves effortlessly into extreme blasting and bass-rolling overdrive, this band sounds insanely driven, and sort of how Napalm Death's latest Apex Predator - Easy Meat kicked off 2015 with its death grinding excellence, Morgue Supplier has set an early benchmark for aggression in the new year. I'd warn you to wear a helmet, but all it would really do is keep the contents of your head contained once they explode.