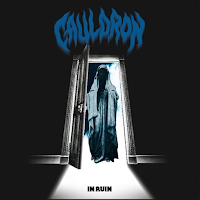 In Ruin reminds me a lot of any number of bargain bin metal tapes I picked up in the mid 80s, the chaff that had been separated from the wheat once the Alpha metal bands drew away from the rest of their packs and ascended to stardom on rising tides of big hair, big riffs and bodacious admirers. It also reminds me at times of random metal tracks I might hear rolling across the end credits of some lower budget horror or action flick from that same decade, after staying up later than I should, tucked into a tent of bed covers and half-devoured popcorn and sponging the cheesy underbelly of the world into a tumescent and impressionable mind. On the surface, it's second rate in just about every possible department...the chord patterns used for the rhythm guitars are often derivative, the vocalist unable to escape those sleazy confines of that Alice Cooper mid-range, the bass lines are exceedingly simplistic in support of the riffs, and the song structures are little more than your standard rinse repeat hard rock schematics.

But you know what? I've enjoyed the shit out of this record.

I am not immune to nostalgia, and where Cauldron's latest effort exceeds any that they've previously released is in its time warp capabilities, to transport a knowing audience to a time that they either lived through or dreamed about. The Canadians' previous efforts were hardly 'bad', but this is frankly my favorite Jason Decay material since his time with his previous band Goat Horn, and I can easily picture myself breaking this out throughout the year, especially when the Autumn arrives and I'm looking for some hazy heavy metal material to go along with my Trick or Treat soundtrack or other such mainstays in my collection. The sound here is contrived from a mix of NWOBHM influences ala Angel Witch, Saxon or ancient Maiden, west coast US hard rock/metal fringers like Ratt or W.A.S.P., and a modicum of German efficiency via Accept; but the atmosphere takes on a much more gray, melancholic tinge to it than an outright 18-wheeler rusty cock ring attitude. Guitars are meaty and melodic in equal measure, laid back and/or driving, with cleaner strings occasionally plucked across a verse or chorus to add a shade of lushness and mood. The chorus parts in tunes like "No Return in Ruin" and "Burning at Both Ends" will imprint more deeply into your earwax if you were born in the 60s or 70s.

There are a few deviations where the guitars surge into some speedier metal elements, and the leads are wrought with a controlled wailing. The drums are workmanlike with a splashy snare courtesy of its retro intentions, and the bass lines functional but extremely simple. Decay's vocals definitely have their limitations, and the guy is clearly not shriek-enabled as you'd here in peers Wolf and Enforcer, but he makes due with simpler, hooky vocal lines in his pitch, and they are wise to add in some harmonized backups that once again evoke that sense of age and wonder. It also helps that the lyrics are somewhat serious, this is clearly not 'party metal', though some listeners are likely to draw such a comparison. The production is large and airy, fitting for a highway trek with the windows down, and there is not a stinker among the bunch, not even the 'power ballad' build and climax of "Delusive Serenade". Cauldron's shift over to a new label (The End) has proven fruitful, and if you can set your expectations to the proper mind space, forgetting what came after that irreplaceable 1982-1986 era in classic metal, I hope you'll get a kick out of it as much as I did. Quite a surprise stirring and brewing in this one.