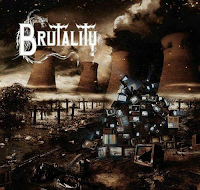 I go into a number of these death metal reunion/comeback albums with an appropriate level of trepidation, so often are they lacking or just plain content to recycle a level of musicianship and songwriting that they had already conquered. Brutality had a long history of several successive reformations and splits before they got their act back together around 2012 and soon after graced us with a solid EP in Ruins of Humans, so perhaps some of the apprehension was unwarranted. Having now heard the crowd-funded Sea of Ignorance over the course of several spins, I can say that this is in fact a competent reclamation of their status on the Tampa underground and in all likelihood one of the most genuinely 'Florida' sounding USDM records I've heard in some years, rekindling not only the aesthetics of their first two cult classic albums but also some of the fires that lit other bands like Resurrection, Deicide and old Death.

That's not to say it's exceptional in any way, but if we're seeking a record that could have come out in 1996 as a successor to When the Sky Turns Black, this scratches the itch slightly better than the album that actually DID come out, In Mourning, which wasn't bad, but definitely dulled down a little of the appeal. This new Brutality is more or less a measured balance of slower, double bass drumming death metal roil patterns, a little lumbering death/doom, and some spry melodic death integration in a few of the faster tremolo picked guitar harmonies which offers a welcome relief against this ever becoming dull. Leads are well structured and catchy, revealing both classical and bluesy orientations that work well against the brutal rhythm riffing, especially in cuts like "Fatal Cure"; and it's good they do, because without this element I feel this might become a painstakingly average affair since there is simply little creativity in revisiting the blueprints so long left behind and not tweaking or twisting them in any new combination. The broad gutturals and snarls of Reigel and Acres are not the most distinct in death metal, and almost all the important atmosphere created throughout the original tunes would be nowhere without all those harmonies and controlled shredding passages. They truly elevate the experience, the product of some good decision making.

Drums and bass are brick tight here, but the latter doesn't develop much of a presence against the churning of the other guitars. As for the cover of Bathory's "Shores in Flames", I feel as if it might have been better left off the album or put on a tribute or something, because the style here is so different than what Brutality write for themselves that it stands out like a dragon ship in a white water rafting contest. I appreciate that these guys have a broad taste in metal and enjoy Quorthon, but the real issue is that they never 'own' the cover. It never becomes flush and fluid with the other songs, and while its produced cleanly it feels too much like the original, just meatier. It simply breaks up the flow of the other songs, and I probably would have enjoyed it a little more if it was replaced or just left off the core of the album entirely. It's not 'bad' by any means, but to interrupt these 3-4 minute bruisers with an 11+ Viking heavy metal epic seems like the one choice here that doesn't live up to the rest, which are all pretty sound...this is a Brutality record by and large which lives up to the band's name and legacy, and even though it's not likely to supersede any nostalgic twinge I might have for Screams of Anguish or When the Sky Turns Black, it's proof positive that a), they are back, and b) they've still got it.