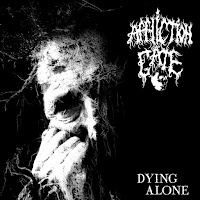 These Frenchmen have crossed my radar a few times previously, in particular on some of their older EPs, and I admit to never being all that terribly impressed. With the Dying Alone EP, Affliction Gate seems to be garnering a little more of a buzz from the press and the underground, and it's not hard to tell why...they play bare bones, pure late 80s/early 90s death metal in a style that could hardly be considered commonplace among the thousands of Swedeath drones and caverncore pundits who at best can only lead you to a path you've trodden before. And sometimes they accomplish that very thing, don't get me wrong, but a band like this stands out by default in that they're drawing influence from a more tightly knit knot of death metal elders, in this case a Bolt Thrower or an Asphyx or a Cancer, often cited and respected but far more rarely aped than an Entombed, Morbid Angel, Incantation, or Suffocation.

The first track is just a straight up burst, with no introduction, and serves as a meet and greet for the bands grimy, roiling rhythm guitar tone which functions best when the band are laying out the pure tremolo picked OSDM licks. When they arrive at the Bolt Thrower-like mid paced rhythms with the rolling double bass it can get a little choppier, but appreciably rough. The leads, though, just soar over this dingy corpse-scape, often glorious like their British predecessors in their middle years, and you end up with a real solid balance of purposeful, traditional songcraft, infernal machinery with just enough melody on the menu to distract you away from becoming exhausted by a din of what are admittedly pretty average chord progressions. If the band picks up the pace just slightly, you do catch a whiff of ancient Death circa the first two records, but it doesn't sound like a soulless emulation so much as genuinely capturing that evil feel in a trance and interspersing it with the more blunt impact, slower death/doom rhythms and the fat, blustering bass lines which add a lot of retro flavor.

Vocals also give off a little bit of a Karl Willetts vibe, a raunchy nihilistic guttural, but they feel dryer since the overall vibe of the music isn't so much belligerent, atmospheric and warlike circa Realm of Chaos. However, I really liked it when the vocals were being paired off against lead guitars in the tune "Dying Alone", creates this vaulted tomb ceiling effect that feels magnificent and I almost wish they'd capture more often throughout the tunes. But that said, the four tracks here are all very solid in their own right, there is enough going on in the backdrop melodically to keep your ears diverted from any substandard rhythm note patterns, and they manage a great balance of slow to fast tempos to keep even this short player well-rounded, rotting death metal that old school gurus will chew up directly, without needing to spit out too much of the bone and fat. The crypt has cracked open once again and the stench that ensues is more than appropriate.