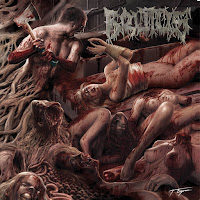 Murwgebeukt was not an album I was expecting to hear anytime soon, largely because Brutus had been so quiet for so long after the suicide of their former drummer. 13 years since Slachtbeest, which was a formidable entry to that sparse field of brutal yet old school death metal that seemed a little out of place when so many bands in the genre have polarized themselves into either the strictly nostalgic or technical/progressive camps. Yet, not only have the Dutchmen delivered another concussive volley of tracks in their native tongue, they've actually done a pretty good job of knocking out a solid sophomore which I'm finding myself enjoying roughly as much as its predecessor. Not there is much risk or nuance to what the band executes, but those looking for tight, pure blooded death metal there is plenty to appreciate.

Essentially the band plays with a similar level of forcefulness as Cannibal Corpse, Severe Torture or older Deicide. Lots of choppy stop/start blasts from recordings of the original drummer, making the disc sound like a fireworks factory is exploding, but often at the expense of the beats feeling as if they were purely mechanistic. The vocals are elongated gutturals accented with smaller, syncopated snarls, giving the record a truly nihilistic feel but not spitting out nearly as many syllables as you might hear over similar material by Corpsegrinder, etc. The bass tone here is a little difficult to discern, it hovers parallel to the punctuation of the rhythm guitar but it doesn't add a lot of swerve or atmosphere to the lower end of the mix. That said, for me Murwgebeukt is really all about the might of these guitars, which shift between evil sounding tremolo picked patterns to faster chugging and clinical mutes which definitely feel like a mesh of the first Pestilence record and some of Cannibal Corpse's excellent 90s material like Bloodthirst.

With 16 tracks, it might seem as if the album would be too swollen for its own good, but thankfully a number of these are just grimy guitar instrumentals or shorter bits that bridge the proper cuts, which are largely consistent even if a lot of the rhythm guitar patterns and beats feel redundant. But there is just something about how they've written the riffs that makes so many of them attractive. I'm highly attuned to the classic death metal from this country and I feel like they do an effective job of  taking elder statesmen Sinister and Pestilence and transforming those influences into something more visceral, intense and contemporary. There's nothing extremely memorable or unique to be had throughout the disc, and even the cover art looks like a hundred others, but it's simply an incessant beating through which a lot more of the guitars stick than don't, and if you're after high speed brutal death without the constant wanking and technicality you've come to expect from newer acts, then this warrants a recommendation. Time will tell if they follow this up directly, or we don't hear from Brutus again until 2029, but there is no question they deliver.