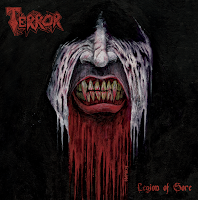 Terror might stylistically sound like a temporal displacement to some, but I think this sort of grisly, evil thrash metal was fairly underrepresented back in the mid through late 80s and I certainly can't get enough of it now. The Cleveland band released a storm of demos in their original active years (1987-1990) which were later collected by some releases which seem equally obscure, but the impression I'm getting just from the two cuts on this 7" through Hell's Headbangers is one of a hungry act with near limitless potential, provided they keep the riffing and gruesome vocal style honest and the production as rich and in your face as they have shown here.

To be a little more specific, these guys play with a sound not entirely unlike a Rigor Mortis or a Demolition Hammer or a Blood Feast, with obvious nods to the prototypes of death metal that were also kicking around at that time...a few riffs here or there involve tremolo picked patterns redolent of Death's Scream Bloody Gore, for example, and there is an overall aesthetic vibe not unlike Nunslaughter (in fact one of the guys was in that band for a brief time). Ugly serial killer thrash with a bold, loud guitar tone that is refreshingly down to hear but loses none of its subtlety when the tunes sprout sloppy leads like blossoms of blood from a dress shirt. The vocals are frightening, gore-drenched, almost as if King Fowley of Deceased had taken a few wounds to his stomach and lungs and was bleeding from them as he growled and pronounced out each line. Bass lines didn't really factor in the experience much for me, but the drums, like the rhythm guitars, just sound brazen and authentically punishing.

To be clear: neither of these tracks are new, both hailing from late 80s demo material and then re-recorded for the band's newfound existence. I checked out the original versions online, and while "Carving Techniques" sounds pretty close, "Legion of Gore" itself is an upgrade. I have to say I'd be content even if they just released an album or compilation with more of that material produced at this level, because it's just good enough to feel like it deserves to be heard everywhere by every reprobate or cellar dwelling underground hesher who has been missing out on it all these years. Time will tell if they've got newer material in them or if this is just a midlife crisis gone right, but even if it amounts to little more than this little vinyl gem, I think some purists will genuinely enjoy hearing it.