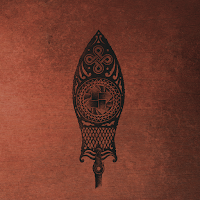 It's been for quite some time that Finland's W.A.I.L. have been putting together the follow-up to their impressive 2009 debut Wisdom Through Agony into Illumination and Lunacy, their acronym writ to its fullest, but the band has not gone forgotten as another example from this scene of a quality act just below the surface of the scene's thriving roster. For Volume II of their legacy, they've honed in on just two extensive tracks clocking in at around 24 and 34 minutes respectively, even longer than those populating their debut. Normally this could prove the kiss of death for an album, breeding repetitious monotony, but rather than pen a few tracks with scant ideas, these are both epic pieces that transcend through a good number of riffing shifts and atmospherics that absolutely string the listener along on a journey into shadowed rituals and vile philosophies.

As with the earlier material, W.A.I.L. spin a web of black and death metal which on occasion breaks into a slower, doom-laden groove, and they actually balance out these styles rather evenly. The vox, while not intensely guttural, are clearly representative of the death metal genre, while a lot of the mesmeric, faster riffing is tremolo picked black metal crested by dissonant, glinting notes which offer just enough variety to keep things interesting. The slower sequences are choppy and seismic, almost like a bridge between traditional doom/death and atonal black metal atmosphere, and the material spans a satisfactory range of tempos so the attention is never being dulled. Near the end of "Through Will to Exaltation Whence Descent Into a Bottomless Black Abyss", they cede into some cleaner strings that are joined by lower, steadily plodding percussion and other instruments which create a compelling and calming transition. This nicely sets up the following track, "Reawakening Through Anguish Into Gestalt of Absolute", in which the calm continues, some chanted, droning cleaner vocals accompanying the plucked, folksy strings and substrate of ambiance until they again erupt into the more aggressive craft, another segue with rolling, dire classical pianos, and back once more.

Again, I have to reiterate that while this is technically two tracks, there are enough riffs here to populate a normal black or death metal album, and for that reason the swollen lengths and conceptual riffing arcs are more easily digested. There is a consistent flow to this sophomore which shows careful plotting, and the idea to wrench the listener back and forth between searing savagery and meditation casts an emotional spell. I also liked the inquisitive, personal nature to some of the lyrics balanced against the poetic cascading imagery of others; especially for how many there are, they make the album feel like even more of a journey that the listener is putting himself or herself through. Production is just raw enough to satisfy the cellar ghouls, but clear enough to distinguish all the instrumentation, important when you're incorporating items like a kentele or didgeridoo, which W.A.I.L. does smoothly along with the gorgeous pianos and cleaner string progressions. Certainly this is on par with the band's debut, and while theirs isn't a name instantly recognized among their more prolific countrymen, they are certainly another example of a Finnish act which understands the wedding of darkness to instruments, and well worth checking out if you enjoy hybrids of traditional black and death metal into a memorable union.