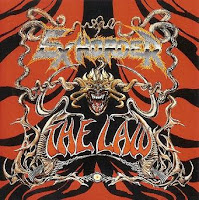 If nothing else, Exhorder's sophomore effort The Law is a study in how an album can be both simultaneously more interesting and less interesting than its predecessor. Wrought of the same thrashing cloth as Slaughter in the Vatican, there are nonetheless several components to this that mark an evolutionary process towards a thrash band that might have eventually resonated with me. The basic ingredients are much the same, but there's a slightly more clinical cut to the riffing. They were always fairly taut and semi technical in the guitar patterns, but here they seem to be going for a slightly more technical 'sound', if that makes any sense. Many of the progressions had parallels to West Coast thrash bands like the great Testament, Forbidden, Dark Angel or even the Heathen sophomore, but placed within the tougher context of their very grounded, constant barrage of aggression. The Law is a more 'musical' effort, with greater contrasts and dynamics and maybe about 2% more risk...

...it's not enough, unfortunately. While they've gotten away from the Scott Burns production I wasn't too fond of on the debut, the guitars here sound even more processed and tingy. This was not an unusual practice for this side of thrash, but the real issue is that as a whole the album feels so dry and boxy and completely lacks an atmosphere. Take something like Believer's Sanity Obscure, and place it next to this, and you see just how much better that album is due to the dark mood conjured up by its musical choices. Here it fees like Exhorder came into the studio with another set of decent riffs and got the bare minimum out of them. More reverb, more layers, more textures, I don't know what combination of these it would take to make this sound like more than an unfinished demo reel in places. When the whole band is firing on all cylinders and hitting some momentum, as in the earlier stages of "Unborn Again", it's a little easier to ignore, but even then I'm a little bothered. There are other issues, like the fact that the clean guitar intros and other segues on the album just don't really match up to the aggressive material, and some of the little experiments like the funky bass parts (also in "Unborn Again") seem like cheesy, ill-fitting ideas. Granted, the bass gets a little more distinct there than on the debut, but not in the way I would have liked...

This is an album which doesn't seem all too confident of what it wants. The traditional, woozy dark blues of the Black Sabbath cover seem incongruent with the faster thrashing, although hearing Kyle sing this one definitely sounds like a prequel to Phil Anselmo's band Down. A lot of the chuggier thrash parts throughout are terribly boring, where the more rabid neck-jerkers like "The Truth" seemed half-way to decent if they could only have stuck a few more memorable riffs amid the very surgical mute picking parts. There is plenty to please the mosh fanatic, but they simply had no capacity to churn out thrash 'hits' like a lot of their comparable West Coast brethren like Exodus and Testament were doing years earlier. Kyle's style still fits the mold of the music, but for some reason the mix makes him seem a little more isolated, separate from the instruments. Half the lyrics on this are pedestrian straight talking rubbish, the other half are better, but I guess I should just be happy there is no anthem to anally raping an individual until she's dead, which would have been as awkward and out of place here as on Slaughter.

In the end, there really just isn't all that much to recommend about The Law. We're not exactly dealing with some bumbling abomination of a sophomore. I've heard far worse...but I feel like the more consistent Slaughter in the Vatican will rightly retain the higher cult status as the years roll on. Not that I'm fond of that one, but this is a slight step down and sideways. It's just not one for the memorybooks, and the competition was simply too large, especially in terms of the songwriting on something like A Vulgar Display of Power. Love or hate Pantera, I often find myself doing both, but I'd rather listen to "A New Level" or "Regular People (Conceit)" individually than this entire album. Some proper thug jams, bro.