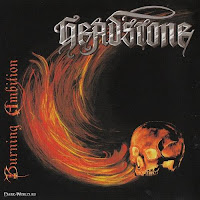 Headstone is a band I automatically want to root for because they possessed all those 80s heavy meal aesthetics I so adored and still find myself turning back towards. Skulls and fire on the cover, a cool logo and album title, and, well, being, German, which was a seal of quality for roughly 25% of the metal I grew up with. That said, they made almost no waves whatsoever when they originally dropped their two albums, and a few listens through their debut Burning Ambition gives you a good idea why. Not because it's a poor showing by any means, but because they never really seem to stick to a tone or mood quite enough to come across coherent, and thus it doesn't give itself much of a chance to generate the catchy tracks or 'hit power' so important during those formative times.

The better cuts here are where they develop a drearier, atmospheric, plodding brand of metal falling somewhere between your garden variety NWOBHM band and the Scorpions. Straightforward, safe chord patterns augmented by sparse, more atmospheric little licks and groovy little fills during the chorus. The vocals are really the highlight though, a higher pitched, dramatic style with a lot of vibration to the more sustained notes, like a hybrid of Klaus Meine, Dio and Biff Byford, but he's unique enough that had Headstone garnered a following he might have gained traction as a pretty distinct B-list classic metal vocalist. He'll eventually burst into wicked laughter to sound like an Ozzy maniac impression, but I do like the emphasis put on the harmonies in the chorus to a tune like "Nightmare" which make it feel larger than life, there's definitely a theatrical bent to parts like that which reveals an influence from a band like Queen. On the flip side, the instruments are just not generated enough energy to really support the vocal style, so by comparison they often feel laconic or too laid back to really flatten you with the emotional impact a tune could have used.

Also, there are a lot of riffs here which feel like bland punk progressions, or bluesier hard rock that feels so mediocre it wouldn't have even been considered at a Van Halen jam session in the decade before this. "Still on the Race" sounds like an attempt to create a "Cold Gin" or something for the band, there's a nice atmosphere created by how the vocal mix cascades over the rest, but the riffs and structure are just so clunky and bland. There are some acoustic parts, which are fine, but the original tracks list (before the lukewarm bonus songs on the CD) is capped off by a piano-driven ballad called "Queen of Dreams" which is entirely too vapid and forgettable. There's not a lot of finesse on any of the instruments, which could have helped fill in a lot of the more threadbare, uninspired riffs, and the production is sort of boxy and uneven, to manage even these super simplistic patterns. In short, wherever Headstone focuses on sounding more mean, or mystical, they really start to earn some momentum, and certainly the handful of tunes that cling to this angle are ones I would happily include with a listening playlist of Teutonic obscurities from the mid-80s...but there just aren't enough of these moments to give Burning Ambition any staying power, and the title ends up seeming like a bad case of irony.