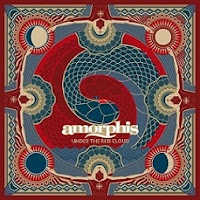 A band that has granted me such listening pleasure over the past few decades can surely be forgiven the occasional dud, and thus it wasn't that big of a deal to me when Amorphis dropped 2013's Circle, one of the few such dips I felt in their entire, extensive discography. Not because it was utter shit, nor did it stray outside the envelope of the band's now-traditional sound, but it was simply insipid, uninspired when matched against such a wealth of quality recordings they've summoned forth across the eras of all vocalists. It's not that they knock it out of the park on every album, but the only other time I can remember being that disappointed was a decade prior on Far from the Sun, which remains to me the worst thing they've ever released, bare and boring and drained free of all the creativity that defined its predecessors across their fascinating transformations away from pure death/doom. Circle was kind of like that, but for that next generation of Amorphis content.

While Under the Red Cloud suffers very sparsely from a couple of the same issues, namely a scant handful of blander chugging patterns or a few melodies that at this point felt fully aimless and rehashed, it was easily a more interesting, varied, glorious effort which reversed any delusion of shark jumping. Rhythmically and emotionally this was a more dynamic, memorable effort which balanced off the escapist folk and prog tinged melodic death metal developed through their mid-90s escalation. Even when they're going for those steadier grooves to support the synthesizer melodies, as in the intro to "Bad Blood", it's all constructed with a more textured determination, more ear candy happening on all levels of instrumentation, and a very shift between the grows and Tomi's cleans, which are as distinct and catchy as they've ever been throughout his tenure with the band, spewing a damn fine set of lyrics. Santeri Kallio's keyboards are by far the centerpiece of this entire effort, shining everywhere with pads both atmospheric and retro, but the lead guitars definitely do their vivid best to manifest those amazing melodies from the brilliant Elegy era (my favorite).

In fact, every instrument shines throughout this, from the clean and simple but compelling bass lines to the shimmery acoustics, there is just enough going on that it feels like one of their best attempts at managing all these atmospheres under one awning of atavist lyrics. Moments of relative calm are contrasted against some of the heavier, intense, percussive builds, and the leads feel carefully and tastefully implemented against the roiling keys and vocals. Some of the individual tracks here are among the best they've released in the 21st century, like "Dark Path" and "Tree of Ages", and the two bonuses "Come the Spring" and "Winter's Sleep" were well worthy of inclusion, the former giving me flashbacks to the Tuonela/Am Universum era. In fact, Amorphis doesn't really leave any of its fanbase out in the cold with the exception of those who wrote them off after Karelian Isthmus, or possibly Tales from the Thousand Lakes...you won't find any drudging death metal here with only a faint hint of melody, but rather the inverse...a brick wall of melodies with none of the old riffing to be found anywhere...only Tomi's impassioned growls vaguely, call back to that era, and in the context they are used here, probably not even those. This has long become the norm for the Finns, and it could be a lot worse, because this is glorious stuff with only a few moments which fail to live up to those surrounding them.