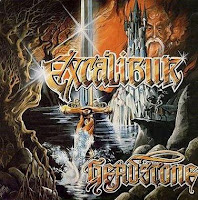 Headstone might not have ended up winning the German metal lottery in the 80s, but credit must be given that their second album Excalibur crushed their debut in every conceivable way, addressing many of its predecessors shortcomings while offering an effort that still sounds somewhat captivating over 30 years later. Part of that will be the pure nostalgia I feel for this period, so important to me when I was developing my metal tastes, when the bands still had stars in their eyes and the wave was far from collapsing; but it's also just a natural timelessness which I doubt will disappear even 100 years from now. I'm not saying Headstone had a classic on their hands with this sophomore, far from it, and there are many better albums in its class, but had the group continued to strive towards a stronger sound, incrementally improving themselves as they did in just the one year between 1984 and 1985, we might have had a contender eventually...

It does not hurt that Excalibur opens with an epic synth piece in that cinematic, cheesy but reverent Tangerine Dream fashion which immediately tempers expectations towards full-on escapism. You are suddenly in a land where 'some moistened bint lobs a scimitar at you', ready to clash against foul witchery and steel-clad traitors. Now, I won't promise you that the metal content of the album lives up to this intro, but it definitely doesn't disappoint all that much in terms of power and volume. I will note that the rhythm section here is so dramatically improved over Burning Ambition...the bass lines are pumping and actually important to many of the tunes, especially when "Burnt in Ice" erupts from the synthesizer intro. The drums sound far more forceful, potent, and provide a bedrock of electric energy over which the rhythm guitars can charge alone. Granted, while the riffs themselves are more mighty than those of the debut...thicker and delivered with authority, they are still rather generic even by the standards of their day, and not often catchy or interesting unto themselves. But as a part of the 'whole package' deal of Excalibur, they are for sure functional and will get your head banging. The vocals also sound better because they are mixed at a better level against the guitars, where you can make out their pitch and strength but not some of their flaws.

Still getting a higher pitched Klaus Meine impression, but also they reminded me a lot of the Dave King performance on the Trick of Treat soundtrack by Fastway, which is a good thing because I rather enjoy much of that album. He also pulls off some really shrill screams in parts that give you the impression he could achieve a Halford-ish range if he put some work in...although his voice is not quite that unique or impressive in general. What's even better is that the songs here are fluid and consistent, mostly paced at the same fist-bumping and stadium bench-stomping speed, and dowsed in that same washed-out atmosphere which I thought was one of the strong points of the debut. But this is just such a mightier representation of Headstone that one should simply ignore Burning Ambition and head straight for this if you're able to find one of the reissues and have an interest in this scene and period of trad metal. Even the ballad here, "Well of Love", with its slightly medieval feel, is a boost over its counterpart on the debut. It's not without a few flaws and a lot of predictable riffs, and doesn't quite place with German's top tier metal acts of its day, but if you're into the archaeological quest for atmospheric obscurities that can transport you back to that nostalgia beating at the strings of your heart, or you're younger and pine for that feel you get from the 80s records and films, this one is a satisfactory swan song for an act that nobody ever seems to have been listening to.