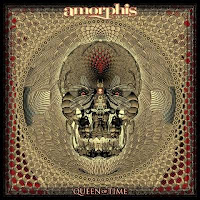 Queen of Time might not ingratiate itself upon listeners who tuned out to Amorphis after their death and doom roots, but if you've been following the band ever since the mid-90s with enthusiasm, or had a later entry point into their catalog, then I can't imagine you'll be disappointed by how absolutely massive this thing sounds. Like it's damn fine predecessor, Under the Red Cloud, this is another album that calls upon various eras of the bands musical growth and fuses them all into a vessel worthy of sailing off into the future. The growling of their earliest years; the soaring, serious cleans of their prior vocalist Pasi Koskinen; the progressive rock influences that are cultivated through the keyboard tones; the spritely, atmospheric guitars patterns that dominated efforts like Am Universum or its predecessor Tuonela; and the sheer balancing act of grafting all those disparate ingredients into a seamless, unified structure, which they've been doing all throughout the Tomi Joutsen era to much success...

But Queen of Time offers even more than that, with lush passages of orchestration, grand pianos, church organs, dual-sex vocal choirs, saxophone, whistles, and male strippers. Perhaps these are not all entirely novel ideas for Amorphis, certainly not among the symphonic, folk or Gothic metal throngs at large; but there are clearly moments littered throughout this album when I feel like I've entered some slightly new territory, whether it's just the sound design and production values or the fact that they're testing out some new hooks here, or drugs there, or arrangements everywhere. In truth, this is possibly the most accessible of the band's albums...a truth that could likely turn out some longtime subscribers and turn in a broader audience, but that's not to say the Finns have stepped far outside of their normal comfort zone. No, most of the embellishments here, whether you'd equate them with some other big Euro symphonic Goth metal brand or not, are actually delivered with taste and elegance, molding themselves fluidly into the band's contrasts between emotional chorus swells and the divide between stomping and ethereal verse rhythms and lyrics. So the end result is really only to ADD to that formula they've been refining for the last 20+ years, and it's appreciated.

Every single song on this album is great, from the powered-up Tuonela flexing of "The Bee", through the funereal, chugging, growling drama of "Pyres on the Coast", and on into the bonus tracks, which as usual for Amorphis are just about as good as all the content on the album proper, to the point that they really seem like they're just fucking with us by even calling them 'bonus tracks'. It's hard to even choose favorites...."Golden Edge" and "Heart of the Giant" might get a slight edge, especially when Santeri and Esa trade off those synth and axe leads in the latter. Or that intro to "We Accursed", when it briefly feels like the Kalevala meets the Wild West. The lyrics rule. Tomi Joutsen is at the top of his game throughout, capable of delivering a sincere enough guttural or rasp that you can take it seriously alongside the much airier, brighter music, or those unanimously captivating cleaner lines...these guys have their 'Beauty & the Beast' down so pat that it's almost unthinkable to imagine that there are so many bands out their who make it all sound so goofy. The drums sound fantastic, even at their calmest they thunder off across the album's horizon with determination, and along with so many of the moody if traditional chord progressions, there is just never a moment on Queen of Time in which I feel that I haven't been carried off somewhere. And not dropped, thankfully. Because that would hurt.

Now, it might not attain perfection. It might not resonate with me over the next few decades like a Tales from the Thousand Lakes or an Elegy has. I might not incorporate its singles into my own pole-dancing routine (weekends in the city). But judging by the fact I've already spun this thing ten times this past week, when I've got so many life priorities in the way, or other records to check out, I have no problem hailing this as my favorite Amorphis release since that highly formative, evolutionary era. Color me absorbed.