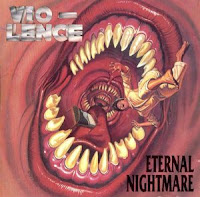 Eternal Nightmare is one of a rare breed of classic thrash albums which managed to remain super focused, concise, and energetic throughout its entire playtime, partly because that length itself was used as a boon. Reign in Blood would be the prime example of the form, and rightly so, but here Vio-lence offers less, and longer tracks. There is no fluff, no excessive padding here, no attempts to dramatically shake the listener's mood back and forth throughout, and its brevity was always a virtue on car rides, daily jogs with my Walkman, or executing the types of whacks hinted at through some of the lyrics. I'm kidding on that last one. Well, I assume I'm kidding, it might have been true for some person or persons out there, but the point still stands...there is a hell of a lot of awesome packed into this 35 minutes, more so than most albums in this genre 15-25 minutes longer, and it was truly impressive for a debut album, so it's no wonder it drew the attraction of MCA/Mechanic right out of the starting gates.

Speaking of 'starting gates', the opening to the titular "Eternal Nightmare" might just win the award for metal tune which most puts me in the mindset that I'm about to participate in a bull fight, or to stroll out into some gladiatorial match, the sun just starting to rise above the upper levels of some colosseum onto the jeering crowds, and the sands beneath. It's only about 30 seconds until the faster licks arrive, but just with those opening, clashing chords and the belligerent melody that rides in on them, you know you're in for a massive melee, and that the band is already living up to its moniker. Then the frenzied winds whip up the dust, and it hits that :42 second mark riff and HOLY FUCK. It's as if equal parts testosterone and kerosene have been translated into pure audio form, the envy of six trillion pizza-thrashers 20-25 years later that would try to emulate this along with their favorites from Exodus, Suicidal Tendencies, Forbidden, Nuclear Assault and D.R.I....failing miserably. Because when I was a teenager myself, still rusty with the six strings, Eternal Nightmare is the exact sort of album I'd sit around trying to pattern out with the limited education I had on that instrument. The very essence of thrash's evolution from its punk and trad metal roots into something distinctly more keen edged and abusive. A whirling, whipping cloud of razors that haven't gathered any rust even as I sit listening so many years after its introduction.

The album places its mid-paced or 'breakdown' sections perfectly, like around 2:20 in "Calling in the Coroner", Sean Killian spouting out his post-vehicular-homicidal narratives over a total moshing of a riff. You want to jerk your neck around so much to parts like this that you'd end up on the back of the ambulance with the other remains. The brighter, more melodic picking progressions sprawled across the album in places like the intro to "Phobophobia" were always fresh and memorable, well in line with the better material from their Bay Area peers but recognizable to Vio-lence alone. There's also not a lot of dissonance over this album, it's all bright and sharp and bloody. Atmosphere is delegated more to the combative nature of the riffing and the imagery manifest through the lyrical themes of murder, injustice and mental instability. Killian's voice, which has long been the band's most divisive factor, took a higher pitched, malicious and manic approach that you'd rarely have heard outside of Bobby Blitz. He'd often raise the pitch, over and over, through individual verse lines, like a preacher in heat to his sermon. Somewhat nasal delivery, but unlike say a Joey Belladonna, there was a lot more aggression and unrest packed into it. An 'I'm on the edge of flipping my shit' aesthetic. When you contrast that style against the gang shouts or the meatier rhythm guitars, it definitely stands out, so I'm firmly planted in the camp that enjoys him.

The rhythm section here is also incredibly impactful, with kinetic and pumping drums, plenty of fills to clutter up the performance so that it teeters on the verge of the more extreme styles being put forth by several of his Californian peers. Bass lines do largely conform to the rhythm notes a lot but at least the tone is strong and not subdued, capable of striking off on its own when there is less business on the strings above it. There are some blistering guitar lines in tunes like "T.D.S. (Take It As You Will)" which wouldn't have been out of place on an emergent death/thrash record, and the leads across the album are uniformly wild and explosive, throttled off into abandon. Even if not entirely memorable or technically impressive, this is arguably the best way to write them...or NOT write them. Just let those man-chemicals well on up from the vital organs and drip out through the fingers and joints to the frets. Production is honed, metallic, and suits the band's energy level perfectly, giving all the guitars and vocals just that much more of an edge...a danger that simply isn't inherent to a lot of the watered down disciples of this style that would arrive later on. This album is a killer through and through, there might be 2-3 riffs throughout that sink it just a fraction below perfection, but it is thrashing royalty nonetheless, mandatory for both 80s enthusiasts and anyone else who values the idea of a fire lit under their ass when listening to metal, the feel of shit about to throw down.