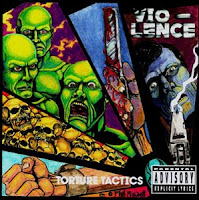 If the Torture Tactics EP had just stopped with the first track, then it would have sufficed, since the titular lead-in is a brash, energetic piece that feels like it was swept up off the floor of the Eternal Nightmare sessions. Everything from the riffs to the inevitable bridge and leads is exciting, the gang shouts complement the ballistic energy, and it belongs entirely within the positive canon I hold for Vio-Lence. Had it been a 8th track on the 1988 debut then it would by no means have dragged down that work overall. Once this first five minutes has passed, however, there is little left but a series of diminishing returns that disappointed me even when I was a teenager and first picked it up on cassette. Perhaps I was just too lazy then to want to pop in and rewind a tape for just the one tune, but I very swiftly relegated this one to that pile of musical acquisitions that you own because you're a completionist for a band, even if you know in your heart it's just taking up space.

So, as I've established, "Torture Tactics" is a good time, keeping in line with the band's excellent output to that point, but what lies beyond? You get a 'live' offering of "Officer Nice" off Oppressing the Masses, and by 'live' I mean probably not, but a song intro from a gig, followed up by some wishy washy live mix of the track in which the vocals are more cavernous and echoing, and the guitars just a little less clear than the proper version off the sophomore album. This is followed by what two of the stupidest Vio-Lence songs in history, not because the music is terrible or unfit to bear the brand, but because the lyrics are so utterly fucking awful that even a sexually repressed 17 year old was embarrassed by them. "Gutterslut" is a lewd testament to some imaginary 'loose woman', or in other words just some degenerate, wishful thinking; "Dicks of Death" provides even more fantasy as they ruminate over having some gigantic schlong. There is a line in that last song, 'And if my dick gets stuck we'll just call Roto Rooter'. Charming, guys! Let's wave those flags of misogyny from our cocks a little higher and mightier as they stiffen.

Now, I GET it...I do. I was there. This was the wake of the 80s, people weren't so easily offended, and for a crime and murder inspired, testosterone-driven thrash band, these topics might even have seemed lighter by comparison to what you'd read on Eternal Nightmare. They probably weren't being remotely serious. But they just seemed so trite and juvenile, even then, and the fact they were wedged on the back half of an EP release seems to support the reasoning that nobody else felt very confident about their inclusion either, just Oppressing the Masses outtakes which were too awkward to include on the sophomore's initial release. "Gutterslut" is only half-bad, because the music is clinical, violent, frantic precision similar to "Torture Tactics", but "Dicks of Death" sounds like they were trying to write a tune for GWAR circa Scumdogs of the Universe, only without the gimmick and without the catchy song...it's pedestrian, useless, and even if were in the most meathead, drunken mentality possibility I wouldn't find it just a trace funny. The vocals are delivered with a more brutish tone, and it simply doesn't not fit, even with its neighbors here. Even Machine Head sounds good next to this tune...okay, maybe I won't go that far. In the end, the Torture Tactics EP has one good tune and half another one, so it's not entirely trash-worthy, but don't waste a dime on it...if you haven't yet picked up a copy of Oppressing the Masses, the 2005 Megaforce reissue has these as a bonus.

Verdict: Indifference [5/10] (open nerves deliver)
Posted by autothrall at 9:02 AM