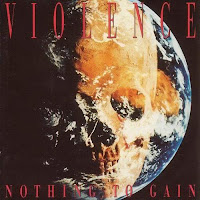 While Vio-Lence largely managed to avoid a number of the 90s pitfalls that many of their thrash peers faced in that decade, their third full-length Nothing to Gain was clearly the portent of a doomed band. A portent that turned out true, once Rob Flynn's other band Machine Head started to take off, with a sound far trendier and more relevant to the times, leaving any real hopes of the Bay Area's wildest second tier thrash band in the dust. And dust there was aplenty as I dug this disappointment out from whatever deep storage it would soon return to. Now, to be clear, this is not an abomination-tier letdown record the likes of which most of the 'Big Four' releases throughout the same decade. It's no Diabolus in Musica, Risk or Load. In fact, it's vaguely recognizable as the sort of thrash metal that Sean Killian and crew erupted with on their demos and debut album. But damn if this isn't one of the most exhausted sounding affairs to ever emerge from a West Coast thrash act of the golden age.

Oppressing the Masses, despite its video rotation for "World in a World" and a high visibility through Atlantic Records, might not have lived up to everyone's expectations of its predecessor, but at least that was still a fun record with a half-dozen quality tracks, and in some instances, the same kinetic intensity I can recall from my first exposure in 1988. This can not be said of Nothing to Gain, an album which all too rarely delivers anything resembling an interesting riff or an exciting vocal line. Killian could still hit some of those higher range, frantic lines that put him in a similar category as legends like Bobby Blitz or Joey Belladonna, and he does so over tracks like "Colour of Life", but there is definitely a more morose side to him, exploring a lower and mid range, attempting to splice in that same edgy feeling he gets in his upper register, but coming up dry, even lazy. The riffs are an assembly of dullards which only seem to electrify when a lead is rifling off over a faster bridge, so there was no real amount of Killian that was going to save anything outside of maybe "Colour". I am more often reminded of mediocre tunes by Exodus and Sacred Reich than Eternal Nightmare, all of which might share similar structures and chord choices, but feel like the differential between a drunk with erectile dysfunction and a Viagra addict with a Bowflex collection.

The mix is deeper, darker and meatier than the previous albums, which compensates slightly for the general lack of virility. The drums sound fine, thunderous and reverberating, and I do like the punch  on the rhythm guitars, especially when they breakaway from the band and churn out into some riff that seems like it might get good...until it just doesn't. The bass also has a good tone, and it's given a few chances to thrum along on its own, but none of this matters when the songs seem so second...strike that, fourth or fifth rate compared to Bay Area classics that were circulating just a few years prior. Nothing to Gain does not sound like a lot of effort was exerted in its creation, maybe more like a wrapping up of a couple lackluster tunes the band still had lying around for a few years after they gave it their go on the first two. We were sort of warned to this, since the 1991 EP before it was forgettable at best, but let's face it...for those of us who were adolescent thrashers through all that brilliance the decade before, it was never a fun thing to watch a band with such potential put out to pasture. This holds itself just above disaster level, but even its few passable tracks aren't even fit as B-sides for an "I Profit" or "Officer Nice", and it's just something I would left in the vault, especially in looking back at what an achievement that debut was.