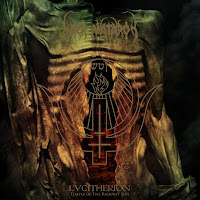 Naer Mataron has long been one of the most intense, aggressive of the Hellenic black metal acts, but even with that knowledge in mind I couldn't have prepared myself properly for the beating that was Lucitherion. The band has long nurtured traces of death metal in its punishing delivery, but this is the first album where I can say that it's actually not just balanced off against the group's black metal fundamentals, but actually dominant through the mix. From the guttural vocals implemented by veteran Kaiadas, to the way a lot of the more dissonant riff progressions are phrased, to the sheer force and speed of the drumming, I detected more than a few traces of both the Brazilian blast mavens Krisiun and Rebaelliun or the more local European hybrids, specifically Behemoth at their most propulsive as they too were crossing over from blacker roots into frenetic, brutal death metal territory. While this all adds up to a clear departure from 2013's more atmospheric Και ο λόγος σάρξ εγένετο, my favorite of their offerings, it's performed with obvious consistency and proficiency.

A good portion of the record is devoted to blasted tempos lathered with guitar patterns that carry an Eastern or Middle Eastern feel through their note selections, creating a ritualistic framework that occasionally reminds one of a Melechesh or Nile, but also not cast too far from a lot of this band's previous albums like Praetorians or River at Dash Scalding. However, rather than the monotony of using this technique like a one trick pony, Naer Mataron punctuate the tracks with slower to mid paced breaks that help flesh out the compositions. Not every track is equally memorable, and they often tend to bleed in with one another, but not entirely, and I found Lucitherion was back loaded with a lot of the better pieces, like "Uprooting of the Shepherd King Hyksos" or "Ra-Horakhty-ATEN", each packed with some of the more distinct riffing palettes and dynamic impact. You never get a sense that Naer Mataron are attempting to simply flaunt their extremity, they don't wank off with a lot of lead guitars or have the audience repeatedly banging itself against a brick wall of boring material, this is strictly songwriting to which the frenzied, demanding pace is best suited.

Lyrics involve occult, ritualistic, mythological matters spun out with titles in Latin, Greek, Egyptian and other tongues, which is in fashion with the band's interests from previous albums, and draws a parallel with some of its countrymen ala Acherontas or Rotting Christ. To that effect, they don't involve a lot of ritual atmosphere or haunted phrasings, which are not necessarily missed, but might have helped at least round out the first 4-5 tunes. This also isn't the first time they've gone so over the top, but in terms of production it's their most punchy and polished, and the structure of the riffs, plastered with all the guttural grunting. It's a deeper, meatier effort than something like River at Dash Scalding, which also featured insane blasting but had thinner, sharper guitars and vocals that were set at more of a howl and rasp which didn't stand out much from the instruments. Here it all sounds fluid and falls into place, a different experience but one that marks a successful reinvention of their style which doesn't abolish their 20+ years of history. One of their best, though I wasn't as absorbed quite as much as its predecessor.