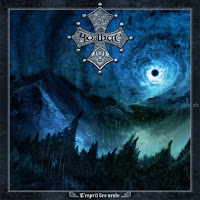 Had L'esprit des vents been released during the heights of the second wave boom in the mid-90s, it would no doubt be heralded as one of the all time classics of the black metal genre, riding high on its superb production, incredible musicianship, contrasts of savage aggression and melody, glorious/Medieval atmosphere and the absolute sense of pride and desperation created by the vocalist known here as Spellbound. As atmospheric as it is traditional in terms of how it implements the riffing structures of its medium, this is a case of 7-8 years absence being put to great use, an extremely well rounded recording that rarely if ever falters across its robust hour of material, and provides just enough glinting acoustic segues and variation to smooth the edges of redundancy that might have otherwise crept in had it been on full blast for the sum of its playlength.

I had actually heard both of Aorhlac's prior albums, and come away with a positive impression of the 2010 sophomore La cite des vents, but when this new album arrived through Les Acteurs de l'Ombre Productions, I was immediately taken in by the beautiful, gloomy cover art and packaging. Once I had actually cranked the sucker I was just stunned by how much the group had improved during its years away from being a blip on the underground radar. Unlike their more avantgarde, unusual countrymen like Blut Aus Nord or Peste Noire, this trio approaches the style with a conventional aesthetic...effortless, furious blasting comprises a great deal of the bedrock, and built upon that are flurries of chords and tremolo picked melodies, that while not unique, breathe some fresh air into a practice once perfected by Scandinavian acts, particularly the Swedish upstarts of that 90s period. These are not legion, however, since they'll weave in more evil sounding patterns, some licks even bordering on a blackened thrash. At the same time, they'll go even further down the melodic path than many of their forebears, with some blazing harmonies reminiscent of classic Maiden or Omen, paired up really well with the harsher sequences so that they never really cross into the blackened heavy metal category; they just extract this one technique and work wonders with it.

The rhythm tones are superb, with just enough grain to prevent the record from studio sterility, while the melodies bleed well and clear into their respective speakers. But rising above all that is the vocal performance, which just howls, rasps and soars off across the battlements of instrumentation like a bird of prey closing in on its kill. If you're familiar with French and Quebecois acts, Forteresse for example, you'll know there's a lot of passion inherent to how the lyrics are delivered in the native tongue, but here they are working overtime, perfectly placed, barked and bleated out over every single measure of the music on which they appear. The drums are frenzied, splashy, pregnant with fills wherever they can be inserted to thwart any chance of the errant ear becoming bored with what it's hearing...truly second nature when the record is ripping away, but just as formidable when they lapse into some mid-paced, majestic sweep where the album transforms into this atavistic mead hall drink-off, sans all the fruity, dweeby 21st Century Renaissance horseshit that half the bands wielding the 'pagan metal' brand step in half the time they step in a recording booth.

What a rush. A rush that makes me feel like I should be standing in a field five to fifteen centuries ago, a peasant smeared with blood and dirt, whether from killing or farming, not knowing if I'll starve by the next morning or be stabbed to death by a roadside campfire. But damn proud to be there either way.