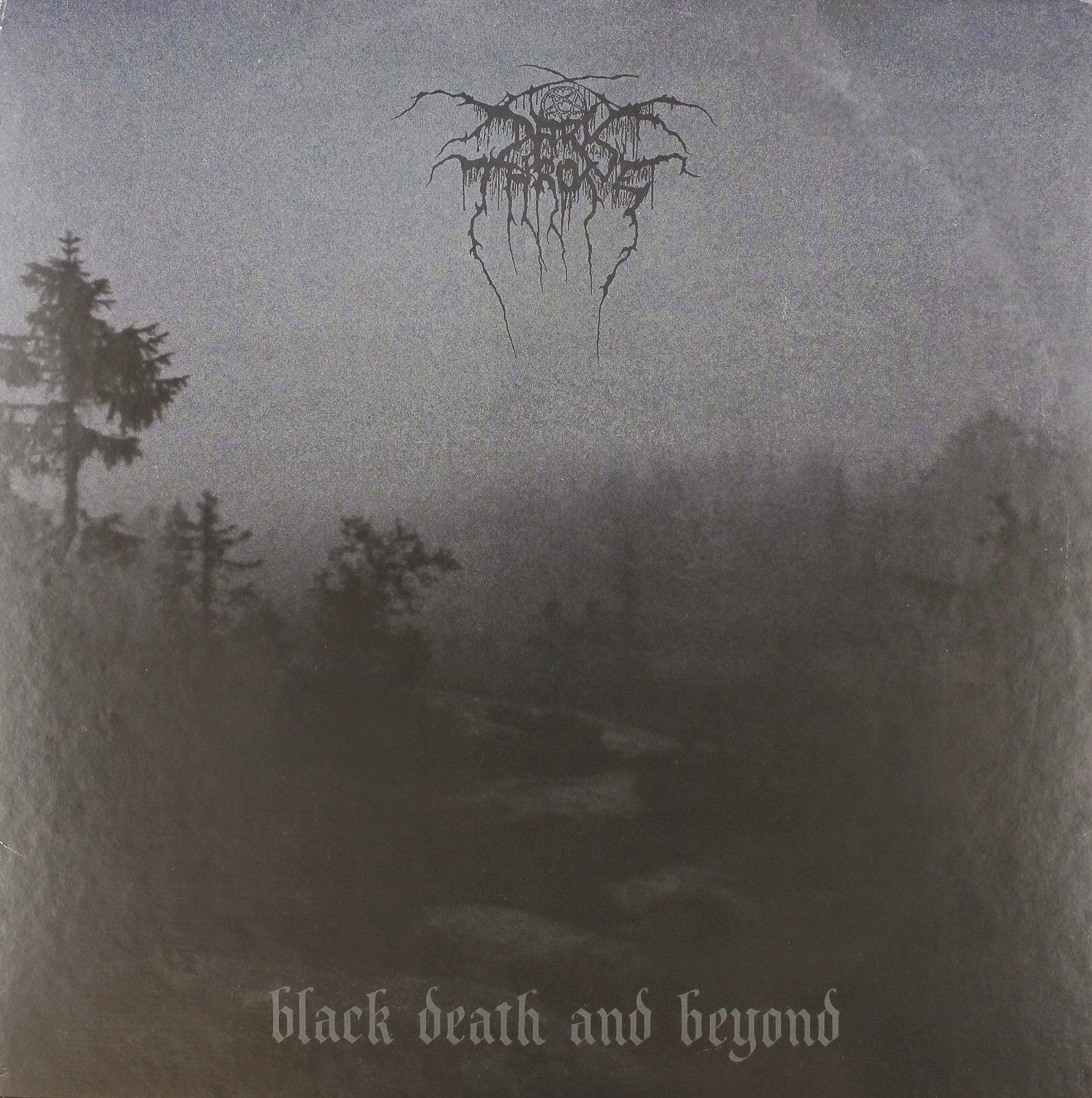 My initial reaction upon seeing another of these Darkthrone compilations was not a positive one. Beyond Preparing for War and the Frostland Tapes, they seem to have become an increasingly useless proposition to free the band's audience from some of their hard earned scratch, culminating with the inane and worthless Introducing Darkthrone, which as we all know sits gathering dust at the local record shop alongside Introducing Ricky Martin and the much sought after Introducing The Monkees. However, despite the level of bile rising in my throat every time one of my favorite bands is either served some rehashed anthology dreck, I am forced to swallow a glass of water with Black Death and Beyond because there are actually some touches of personal involvement with this LP set that might just make it worthwhile, at least for a collector, not necessarily for anyone who is first coming into their music; those individuals should immediately proceed to experiencing their full-length albums regardless of the media upon which they are printed.

No, there is nothing new musically on the recording, which still reduces its overall value enormously and bars it from becoming a mandatory acquisition, but how they've exactly ORGANIZED the tunes here is at least interesting. The 'Black', 'Death' and 'Beyond' in the title actually correspond to how they've arranged the chronological material, with one vinyl devoted to the earlier death metal years, another to the middle phase, exclusively raw black metal, and the 'Beyond' represents their later deviations towards punk, speed metal and ultimately heavy metal. It's a neat gimmick with which to parse out the band's stylistic mutations, and give the listener a little more uninterrupted immersion as if he/she were listening to a Darkthrone album of a particular niche. Past that, you can also tell by the song selection that Fenriz was actually more involved in the selection, since this is not just some 'best of...' arrangement with the band's 'better known' material, but a mix of the more popular ragers and the obscure. As invested as I am in the majority of their discography, which features very few tunes that I do NOT adore, it's still quite affirming to find that the creators themselves hold tracks like "The Wind They Called the Dungeon Shaker", "Graveyard Slut" and "The Ones You Left Behind" in such regard. That's not to say it's an 'ultimate collection', because that would require the band just releasing a 16-LP box set which I would possibly sell a few organs on the black market to acquire. But there's a bit more qualification here than just 'throw a bunch of random songs together'.

Even better than that, the set comes with an excellent, lavish book loaded with photos, biographical info, interviews of the band and others, and this is something that should sell like hotcakes even if separated from the boxed set (no idea if it will be). I can't attest to the book alone covering the value of the entire purchase, but this is something deserved and that I'm sure a lot of us were waiting for. Fenriz and Culto are nothing if not constantly entertaining personalities, and there are even some words with the old bassist Dag Nilsen in there. Yet another component which keeps this release hovering over the edge of the fire, though I fear with only about 3000 copies in circulation, not enough of the audience will be able to get their hands on it (maybe a separate physical release or a .pdf floating around could fix that). Of course that assumes more than 3000 people actually desire to read such a thing, but if not then the state of the world is far sadder than we thought. In the end, an additional disc with a bunch of unreleased or exclusive material would have padded out the deal and made this far more mandatory, but the addition of the book, and the minimum of effort arranging the musical content protect this from the typical artillery shelling such compilations deserve. Is it still a Peaceville profiteering sham? To an extent, and $70-80 US is steep for a bunch of music you likely already own, but the track selection flows well through the discs, and there is at least a qualifying 'cool factor' to compensate. But buy it for the book, or not at all.