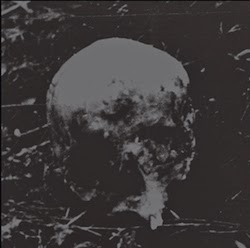 Harvest Gulgaltha's 2012 cassette demo set an ungodly primitive tone for a project that was heavily focused on unearthing the roots of extremity, in particular the death metal genre, and applying them to the modern day with little more than ugly, harrowing conviction. Necrosophic is a compilation of three other, shorter recordings which remains 100% steadfast to that ideal, and if anything ups the riffing ante just slightly enough that it doesn't feel lazy or stubborn to the extent that it won't try out a new riff style here just to convey a marginal sense of variation. Not that it needs so much help there, since it fairly evenly distributes aesthetics across the death, doom and black metal genres, but the way this LP actually comes across is as a unified, consistent experience rather than a collection of disparate recordings, which so many of these sorts of demo collections ultimately fall prey to.

Necrosophic is an opaque wall of heaving, rotted flesh constructed from the most barebones tremolo riffing patterns and slower, sepulchral doom grooves conjoined with a hideous guttural vocal that retains a lot of torture and sustain as it echoes across the crushing primacy of the songwriting. There are occasionally blasting rhythms or dissonant, airier rhythm guitars representative of a slower style of black metal, and taken as a whole it recalls a lot of 80s genre godfathers ranging from Death and Celtic Frost to Cianide or Nihilist/Entombed, but rarely favoring any of those schools above the other, instead presenting itself as this bludgeoning blank slate to which almost any idea might be applied. The cuts never overstay their welcome, even when consisting of a handful of simplistic riffs they rarely transgress a 4-minute boundary, and there's enough compulsion and variety to those tunes that you feel appropriately absorbed; as with "Of Power in Suspension" which opens with ritualistic, softer drums and dark ambient textures for about half its length but then strikes you in the face with a shovel, knocking you into the nearest open grave and then smothering you with those roiling, dirty guitars until you're nothing more than asphyxiated worm-food.

Riffs are not terribly memorable on an individual basis, their efficacy is in just how uncomfortable and churning and bleak of an atmosphere they create, generally the most formidable when they are played at a crawl like in "Zenith of Formless Chaos" or the longest tune "Liberation of Corporeal Flesh". The guitars and vocals create such an ominous low end that the bass really doesn't come through often for me, but we're not talking Craig Pillard/Incantation style on the latter, more of a ruptured stomach lining growl with plenty of scrutable suffering. Drums seem a little lower mixed, but effectively murky, and the louder splashes of the cymbals are paired up perfectly with the more measured, Cyclopean grooves. I don't know that I can judge this material higher or lower than what I experienced on the demo. Necrosophic is slightly more fulfilling due to the number of tracks, but it presents that same level of darkness and density which complements the necromantic, simple image of the human skull on the cover. Filth purists, who fondly recount an era in which these genres were so often interwoven without a second thought will enjoy its honesty, in particular the death/doom crowd.