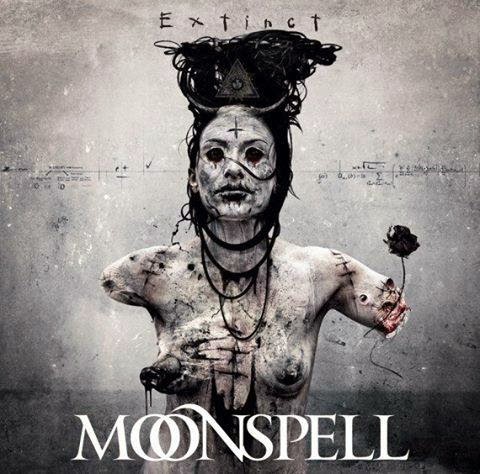 Portugal's premiere metallic export seems to cycle through as many phases as their name would imply. The emphasis earlier this century was on returning to their harsher hitting, blacker roots, wrought in simpler, crushing riffs and vocals that took the primal essence of their first few albums into the meatpacking facility of contemporary production. Now, it seems as if they've wandered off that track yet again, changing with the tides, and are attempting to fully embrace the swooning Gothic metal that garnered them some international success and touring opportunities via Irreligious, Sin/Pecado and the more subtle, introspective Butterfly Effect. That's not such a bad thing in my eyes, since I enjoyed two of those discs quite a lot, and found Fernando Ribeiro's deep intonations an exotic Euro-alternative to Peter Steele's bass-baritone, far more versed in Anne Rice fiction and goofy vampiric sentimentality than his depressive American counterpart. You might think I mean that as some sort of insult, but I assure you, far from the case, it is one of the endearing qualities about Moonspell that insures I check out just about everything they release, and as with their prior double album Alpha Noir/Omega White, I'm generally not all that disappointed. They haven't been churning out masterworks this past decade, but the records are usually good enough that I'll keep them in rotation for a few months until a heap of better has come along...

So Extinct goes big with its flaring, accessible Gothic anthems that seem as much as ever like iron clad paeans to the sounds of bands like The Mission, Love Like Blood, Fields of the Nephilim and Sisters of Mercy and their ilk, no doubt inspirations upon these guys for many years running. To and extent, this rock fueled, post-Billy Idol momentum is reflective of the scene that exploded out of Finland 10-15 years ago by bands like H.I.M. and Charon, but rather than writing some of the most watered down, corny mascara-man-metal, there has always been a more philosophical bent, a poetic license taking with Moonspell's musings that places them somewhere closer to the source of those 'dark' feelings which made such an impact on the psyche of an entirely subcultural generation back in the 80s and earlier 90s. This isn't your femme fatale garden variety supernatural Romance shit, it's the World of fuckin' Darkness. Vampire the Fucking Masquerade, siphoned off into ballsy if obvious huge chord patterns that the Portuguese thankfully accent with tasteful melodic licks, total 80s Goth synthesizer lines which feel bright as streetlights as you're walking 13 city blocks to the closest trash dive bar that will play you Depeche Mode and David Bowie non-stop to the break of dawn. Not as gloomy, poignant and powerful perhaps as their stylistic neighbors Tiamat have become in their middle age. At least half a dozen times listening through this I caught nostalgia for rummaging through the bins for overpriced Cleopatra Records CDs back in my beloved early 20s.

The songs are not "Ruin & Misery" or "Opium"-level catchy, but they really strive for that on "Funeral Bloom" or "The Last of Us", some of my faves here. It's also not an all-out bust for those who want more metal with their Moonspell, because the title track is loaded with hooky floes of semi-black chords and more clinical, punchy licks alongside some of Fernando's more abusive and frankly hilarious demi-growls. The opener "Breathe (Until We Are No More)" also hits pretty hard, and the absurdly titled "Medusalem" has a little Middle Eastern vibe in the melodies it embeds into the chugging mid-paced leather and nail polish. As simple as a lot of the tracks feel, they're always just a layer or two beyond being dumbed down, and the superb production of the bass lines and drumming lends a credible punch to the gut to even those who find the sissy-isms of this style an alien tongue entirely. A handful of tunes like "The Future is Dark" obfuscate the metal elements completely, but still provide grooving, archaic, synth-syrup hooks that match pretty well with those deep vocals; and the album is backloaded with interesting departures like the mellower "Doomina" or the song in French, "La Baphomette", which at least worth a few genuine chuckles, which I'm sure is working just as intended. Love bites in general, but Moonspell does it on the neck.