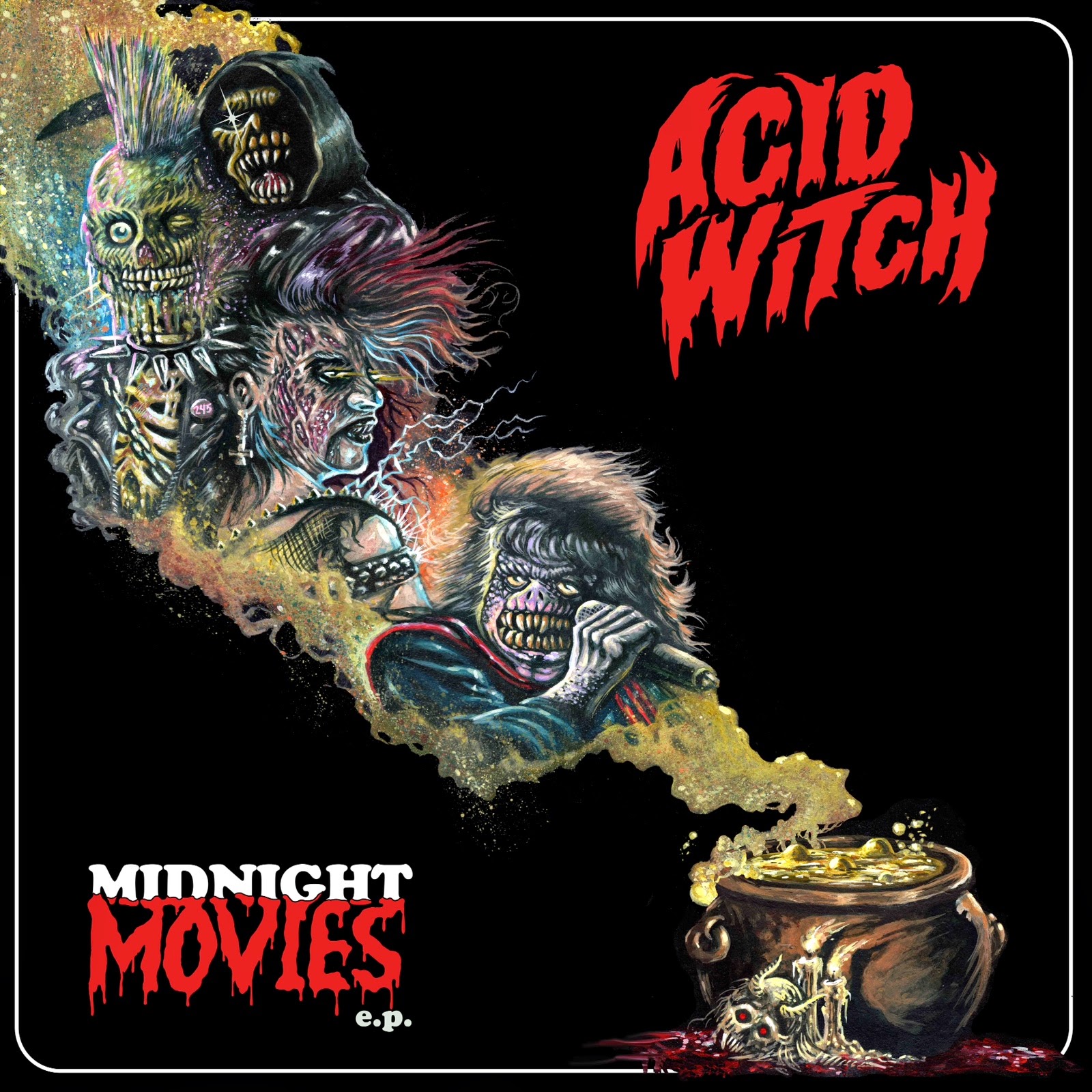 Midnight Movies is an interesting little 'aside' from the Midwest's morbid ganja doomsters Acid Witch, but I'm not quite sure that the 'interesting' is such a positive on this particular release. Not because I don't relish the idea of a death/doom band covering campy 80s horror movie rock tracks, but the way it is manifest here seems a little too much on the 'partying' side of the equation, fucking around where playing it much straighter would have ultimately proven the more humorous route. Hell, I was looking forward to their take on Fastway's "After Midnight", taken from the 1986 Trick or Treat soundtrack, which I happen to really enjoy (the band in general and that song), but rather than transform these tunes into something more fitting for the Acid Witch style, they play them really close to the belt, including the most minimalistic hard rock drum beats possible and guitars that feel too thin and burdened once Shagrat and Slasher Dave start emitting the growled and screamed vocals.

Granted, this is meant to be completely off the wall, and it's even being released on April 1st of all dates, but even then I just can't help thinking this was a missed opportunity to morph such straight shot rockers into some ugly, abusive, cellar shroom doom more like their Stoned album, which I found pretty damn solid. I guess if I was a younger fan and this was the first time I'd ever even heard of these songs and movies, it might feel a lot more clever, but the execution here just seems a little on the lazy side...the beats, the guitar riffs, nothing is conveyed with much more than the power of sheer sarcasm. On the one hand, we now know the band members can hit higher pitches circa a whole lot of cheesy, endearing schlock rock and half the early through mid-80s Metal Blade roster, but once you contrast that with the growling in the bounds of single tunes ("Soldiers of the Night" from Black Roses), it just feels too counterproductive to the cause. That and "After Midnight" are probably the better two songs here, since the others are fairly miserable in translation and weren't all that much fun in the first place...like the gang shouts coming in on "Partytime" over the guttural rasp.

I think the best outcome here is that people will track down the original material and enjoy it, which is more than likely what the members of Acid Witch intended all along; but beyond the fact the 12" has a pretty fun cover and will no doubt become a collector's item, I just can't recommend it. The production is alright, the instruments in the mix seem a little phoned in, and the delivery on some of the harsher vocal lines is pretty 'blah', and that's really one of the only areas in which they've tried to deviate from the originals. I don't mean to be terribly hard on it, since they're more or less just taking the piss, and I certainly share in their inspiration for those wonderful years and all the mystique that used to surround Halloween, metal music, etc when I was a pup in that decade. Hell, if you place nostalgia above all else, perhaps you'll take a lot more away from this than I did, but all it accomplished for me is wanting to hear more of Acid Witch in their native habitat. It's been about 5 years now, so I hope we won't be waiting too much longer for a new full-length of original material.