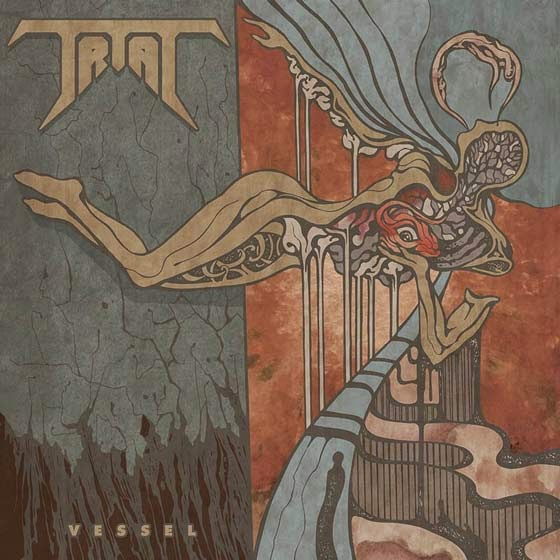 Vessel is an album which is thematically and stylistically similar to its predecessor, yet written and produced with a more professional veneer that frankly contributes to what is one of the best examples of its medium that I've heard in several months. From the excellent Costin Chioreanu artwork to the sheer quality of the studio mix, it trumps the debut while begging forgiveness for any of that record's shortcomings, which were not at all cumulative to the point that it wasn't at least a decent, enjoyable effort. Vessel is simply on an entirely higher plane, a studied and measured collection of cuts which create a more varied experience while offering tunes that are much in line with their forebears, only far superior. I wouldn't say that this is a level of evolution on par with what In Solitude underwent between their sophomore and third records, but it's certainly deserving of a spot on that same radar which vaulted these other Swedish throwbacks into a modicum of international recognition.

Right from the intro track, "Vessel" itself, you will be hooked, despite the misleading simplicity. A slow floe of bright, shining chords crashing against Linus Johansson's focused and improved lines and harmonies, it sets up a more somber, melancholic environment bordering on a doom-like quality. And then, with "To New Ends", the illusion is shattered with some of the same heavily melodic speed metal, imbued with some great tremolo picked lines and chord progressions which feel fresher, more modernistic and easily more memorable than anything on the prior album. From there, the album seems to teeter back and forth between these slower, more controlled sequences ("Ecstasy Waltz", parts of "Through Bewilderment") and some sinister, atmospheric power/speed metal like "A Ruined World" in which the riffing is more subversive and angry. In fact, where Vessel hits the hardest, it's a tangibly more 'heavy' experience than The Primordial Temple, with a genuine savagery to it which strides in a lockstep with the band's more elegant, melodic qualities, and it's almost as if the debut were this tapestry of grey hues that the Swedes suddenly decided to splash various colors upon, making the brights brighter, the darks darker...

Memorable stuff, both the individual tracks and as a coherent, functioning whole. The USPM influence circa bands like Fates Warning and Omen is still evident, but on the whole the way the vocal lines are structured just seems a little more unique. No longer does Trial feel as if it's just a 'retro' band the way they were on the first disc, but one which is committed to channeling its influences into something vibrant, bewitching and fully belonging to the current decade. From the fantastic percussion, the wondrous, swooning bass-lines to the progressive, uncanny licks that sneak their way into tunes like "Where Man Becomes All", this album has proven nearly as riffy as the great Pharaoh's Be Gone, an album I was very taken with last decade. Not quite so flawless and melodic, perhaps, but striving towards that same justification that this niche of the metal realm is every bit as viable and poignant as it was 30 years ago. This all adds up to one of the best albums I've heard yet in 2015, deep and rewarding on a good number of repeated spins, and unlikely to fade from my rotation anytime soon.