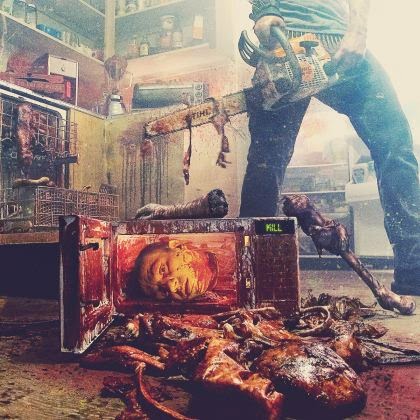 I'm a little conflicted over whether or not an album like Gore Metal even warranted a re-recording. Not that it's my call to make, but the original was an excellent, gruesome launching of  Exhumed from the demophiliac ranks into national recognition, and even if it was surpassed by Slaughtercult in my eyes, I'd still argue that the first was a contemporary classic of US death metal, shucking the cliche Suffocation-inspired trajectory for a slightly more antiquated style, that of British gore-grinding legends Carcass, and then applying a little more modernist meat to the bone, if only to saw it right back off. On the other hand, having been a musician myself for most of my life now, I can understand the little perceived flaws that can build up on an artist's conscience, how he or she might have gone about a recording differently if there were different equipment, production facilities, or mixing ideas in place at the time. Whether or not Gore Metal: A Necrospective 1998-2015 is redundant or not becomes moot, because the product has arrived, it's got a cover image paying homage to its original incarnation, and for younger or newer fans who don't care about hearing or officiating music in context to its creation, this might as well become the de facto version of the album...

Now, I didn't have a lot of quips with the production of the original, but I think the point of this was to bring the guitar tones and mix of the other instruments into a more level balance with their recent records, and that certainly works, but at the cost of the record feeling a lot less vulgar and grotesque. But the biggest change here is how those higher-pitched deathgrind rasp vocals that were originally cultivated from the Carcass influence, in how they interacted with the gutturals, have here been supplanted with a voice that is more akin to the splatter-thrash of filthy 80s punk/crossover/thrash bands, most notably Blaine Cook of The Accused. It really makes this sound a little more unique within its niche, and the dirtier fuzz on the guitars helps to make it feel a lot more like the proto grind this band was partly reared on through its formative years; while some of the faster mute chugging sequences (as in "Open the Abscess") bring to mind the early years of Death, Autopsy, and so forth. Exhumed is also a band which has consistently developed its frenzied lead style through the years to incorporate a lot more melody and structure, something they interestingly seem to eschew here as they adhere more to that random Slayer lead style that became so vital to the death metal groups that actually gave a shit about incorporating them to begin with.

Gore Metal: A Necrospective has a more 'organic' feeling than its forebear, a bit more of an earthen depth and tone to it than the pure flesh-carving of the original which felt like a more 'street' version of stuff like Symphonies of Sickness meets From Enslavement to Obliteration. But that said, for any of its flaws, I really preferred the original to this, even if it wore influences a little more boldly on its sleeves, I just feel like it hit me a lot harder then than this one does now. So, if you were fond of Gore Metal 1998, as I am, I really don't know that I can give this a recommendation. It doesn't lack that level of energy, and the vocal change is surely a good one, but maybe one I'd like to hear them explore more on an album of new content altogether. The songs overall on this simply do not 'fire' the originals, and if I want some organ-grinding sickness, I'd rather go with those. But if you're open to a mildly altered mutation of the tunes, with a few different musicians in the mix (but a lot of the original guys doing guest spots), then this is by no means bad. Maybe the creator really wanted it to sound like this all along? I just won't reach for it over Gore Metal, Slaughtercult, Anatomy of Destiny, or even the last two albums for that matter, and time is in short supply these days, so it's not much more than an ugly curiosity I'll forget about. But it's nothing to get my panties in a bunch over, unless of course it leads to Slaughtercult 2.0. Don't do it, guys!