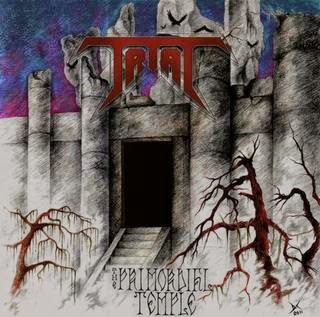 I notice a lot of 'Swede fatigue' when talking shop with my fellow metalheads, but it's hard not to be humbled when a single country seems to excel in so many individual branches of the medium, hearkening back to the 80s when artists there were starting to meddle with the most baseline strains of the genre. This is of some importance when discussing Trial, because here is a group which mirrors countrymen like Portrait, Enforcer, In Solitude, or even Ghost in turning the clock backwards. However, unlike most of those I just listed, a Mercyful Fate influence is not the foremost imperative for this band, but rather a sounding board of antiquated European and USPM acts whose glory days existed within that same time frame. In experiencing The Primordial Temple, and the records to follow, I felt myself drifting back to the Walkman Days of the first three Fates Warning albums in particular, mixed with a little Omen, and some Swedish forerunners like the first couple Europe records and even a handful of atmosphere, obscure bands like Proud, whose Fire Breaks the Dawn disc is underrated to this day.

In particular, this debut is an effort which evokes the Metal Blade period of the mid 80s, with some forcibly structured rhythm progressions intricately laced with more melodies than you could fire off a can of hairspray at. In addition to the bands I tagged earlier, I caught the wafting fumes of old Lizzy Borden, Exxplorer, Helstar, Sound Barrier and other bands that wrote these hazy, dreamlike heavy metal escapes which delighted in skirting the realms of the then-fantastic, without the boldest or heaviest production and entirely negligent of the concepts of grooving and moshing that usurped the public perception metal throne throughout the 90s. At its core, much of the composition on this album is a pretty straight shot from the Iron Maiden school of thought, but brought to an Awaken the Guardian level of complexity. Controlled wanderlust. The album lacks nuance or innovation of any sort, but it does seem to tap directly into the lifeblood of what so many of us metal dorks envisioned in our youths when we fantasized about Corvettes and big-haired blondes & brunettes in Def Leppard tees that would not give us the time of day when any greaser of an even cursory muscular physique was present. That is to say, there is little to nothing original about The Primordial Temple, but it sure sounds like a lot of heart and spirit were fomented in its assembly.

Linus Johansson's vocals might be a sticking point for some listeners, since they don't manifest the glass-shattering range or unique qualities that many of the great 80s front men were known for. His syllabic delivery is quite similar to the great John Arch, albeit with less of that unearthly, ethereal shrieking quality, and more of the stunted, everyman quality that populated the middle and lesser rungs of the metal catalogs of that decade. I do think he's a work in progress though, since his presence on subsequent recordings is an improvement over this, and sometimes the wavering notes and 'flaws' in his voice actually give the phrasings a little bit of character and vulnerability. But the real stars on this record are the guitars, the harmonic passages populated the depths of tunes like "Progenies of the Avenger" and the thundering of "The Sorceress' Command". Bass lines here are a little more pronounced than your average recording from the old days, with the notable exception of Steve Harris who is quite obviously an influence. The drumming is solid, with a lot of energy, splash and pop that help kick the riffs in the ass even when they're slacking off a little.

The album also seems to grow in quality as it proceeds through the seven cuts, with "Opener of the Way" and the 13-minute epic "Phosphoros" numbering among my favorites, though I'd say the strength of the material overall is consistent enough across the entire 40 minutes. Trial doesn't make broad leaps in style or substance here over its inspirations (with even lyrical callbacks to Fates Warning, though they might not be conscious), and there is no reason to believe they are in any shape to do more than tickle the nostalgia centers of our brains, but if you're looking for a direct, dextrous exhibition of melodic heavy/power metal which eschews the prospect of modernity and conventional, overly loud and compressed production, this does serve as a decent second stringer to the formative works of In Solitude and Portrait, and if you're constantly mining the rosters of labels like High Roller and StormSpell for a new aural time machine, I can save you some of the trouble and instruct you to just check this band out right now.