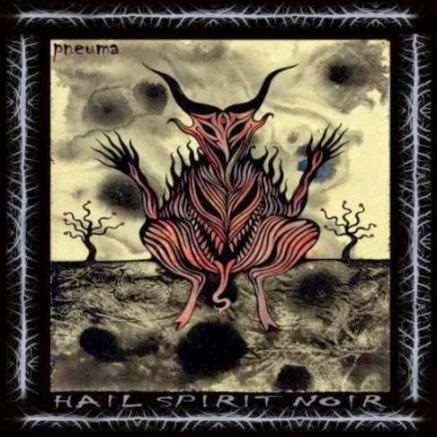 The marriage of black metal to the many faces of progressive rock is probably not a novelty by the second decade of the 21st century. Bands like Enslaved were early adopters of the hybrid, but it is one that has never ceased to enthrall me personally, since I possess no aversion whatsoever to all the mixing and matching if it provides me a fresher listening experience. No, it won't always work, it won't always distribute evenly enough to gel the styles, but then a gem like Hail Spirit Noir comes along and redefines just how much this mutual integration can become its own, seamless form. More than so many other bands, I don't listen through Pneuma or its brilliant younger sibling Oi Magoi as if they 'clash'. Contrast, yes, but the Greeks make it all sound so natural that I wonder why the two weren't a whole in the first place. As if this very record could have existed somewhere in the late 70s, the product of some guys with huge imaginations who might not have had the vocal talents of an Osbourne, Dio or Halford, so instead retreated to the deep Underground, providing quasi-soundtracks for unreleased Hammer horror flicks.

Oi Magoi was ultimately my favorite metal record of 2014, but listening back to this, I can't honestly tell you it was that massive an improvement. Catchier, perhaps, but the genius bastardization of genre was already in full flux a couple years earlier. Lots of 'expected' folksy and proggy instruments here, like organs and old synths, loads of cleaner guitars performed with a bluesy tinge, crested by Theoharis disgusting harsh vocal and his wavering, accented cleans which often seem like a Hellenic Nick Cave or Johnny Cash hovering over the edge of perdition. Chords contribute to slower, dramatic riff progressions here that almost feel strangely Beatles-esque, only if you the Fab Four had ingested countless mushrooms and frolicked naked in the fields within satyr-nymph love trysts. Pneuma possesses an idyllic and ugly dual nature which is captivating through the end, even when a few of the individual riffs might not shine as much as the overall work; there's even a tint of trashy old Cleopatra Gothic vibe in a handful of the tunes like "Let Your Devil Come Inside" which in at least a few spots sounds like Christian Death or Mephisto Walz performing occult rock. I couldn't tell you if that were some conscious decision, but the real wealth of Pneuma is in that esoteric reaction.

I'm also reminded pretty often of Nocturno Culto, especially his presence in the band Sarke, where you get those raw, unfettered post-Frost vocals mired in some fuzzy, caustic primal metal chord patterns ("Against the Curse, We Dream"), but they really evade so many direct comparisons to any one source because you just never have any idea of what will happen next. Some parts seem like Opeth if they were much better at evoking that archaic prog rock nostalgia, only tainted with the fabric of nightmares; others are more fluidly black metal, just the really fundamental kind that groups like Vultyr shat forth in their own aspirations to rewrite the script. I would actually go so far as to say that, while there aren't songs here nearly so evocative as "Satan is Time", this debut is a fraction more consistent in construction than the followup. Great drums, nuttier percussion, fuzzy and spurious little lead harmonies, variation everywhere, even in the track lengths. An amazing debut that sets up what I dearly hope with be a lengthy career in which the experimentation and fusion never ends.