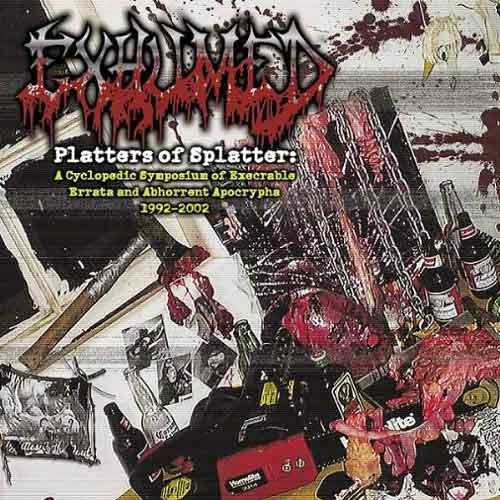 I've mentioned a few times in the past that Exhumed was around for quite awhile before striking up their deal with Relapse which produced their debut Gore Metal, and Platters of Splatter does a hell of a job giving the ardent fan a comprehensive glimpse at not only those earlier demo years, but also a bunch of split material and unreleased tape that was woven around their full-length records up to this point. Clocking in three discs with nearly four hours of content, it's pretty much a dream come true for anyone who wanted to collect their split appearances, demos, and rarer recordings in one place, rather than the arduous trials of bootlegging and tape trading all the originals, what originals were still around. I should point out that this is not the 'complete' discography of the Californians, spanning 1990-1998, but it seems like it was at least a genuine stab at such, and exceptions probably have a good reason for their omissions, maybe sounding far too shitty or just lost to the ages...

Beyond the fact that it's just so massive, with over 70 tracks, it also features a lot of damn fun tunes that would not wind up on the band's better known studio efforts. In fact, you could probably pick out a dozen or so cuts on this that, if polished up, might have made for a great studio album themselves. The style is largely British goregrind-influenced (Carcass, Napalm Death), with a few tunes veering off into a thrashier territory, some others representative of a more old school US death terrain circa 80s Death and their like. Unlike a lot of other grind-evolved acts, Exhumed had a lot more structure to the material, with songs generally hovering around the 2-3 minute mark, not just 30-60 seconds of spastic excess but a very riffy take on the medium which took the more political overtures of earlier Carcass and transformed it into a serial killer streak inspired by serial killers and other staples of horror, both real world and cinematic. The Carcass naming conventions thrived in a lot of tracks like "Necrovores: Decomposing the Inanimate", "Dissecting the Caseated Omentum" and "Carneous Corneal Carbonization", but they also had some good old 90s brutal USDM silliness like "Necro Transvestite", "Oozing Rectal Feast" and "Bone Fucker".

As much of a treat as it is to hear tunes from the 92-95 demos, I think the strongest material is some of the split work like the whopping 11 cuts they did alongside Hemdale (In the Name of Gore, 1995), which are more or less full-blown Exhumed constructions that feel flush with the studio material they'd put out a few years later. There are also a few covers present here which are thankfully NOT redundant with the Garbage Daze Re-Regurgitated covers album they put out later. Granted, a few like Possessed's "Death Metal" just come across as cluttered, clamorous and forgettable, and other obvious choices like Carcass' "Exhume to Consume" are too close in nature to the originals and just nowhere near as compelling, but hearing them mince up King Diamond's "No Presents for Christmas" is worth a laugh or two, though I think the irony is self-evident and I might have preferred they left off the shrill vocal tribute and just went all out gore on the thing, making it 100% their own.

The second disc features a lot of the content, and some of it sounds bloody fresh despite the decade that had elapsed before they were released on this compilation. I think the one disc that just doesn't hold up to the rest is the third, featuring a lot of alternate and live radio recordings of tunes that are redundant to those you'll find elsewhere. Not that they sound bad in that context at all, but it's hard to pair up stuff like this with old, rare tunes I genuinely haven't heard and maintain my interest level. It's a solid close to the compilation, but personally I found most of the hideous highlights confined to the earlier discs. All told, though, this is a pretty thorough retrospective of a band that is honestly among the brightest and most visceral we've had in the states through the late 90s and 21st century, surely derivative but actually honoring their forebears and then putting some genuine, energetic spin on the formulas, not ignoring other inspirations in their metal canon and imbuing some thrash and melody in their momentum away from just Reek of Symphonies of Necroticism Part III.XS. Awesome band, and even though I'd make a line straight for their studio full-lengths first, if you did find this lying around at a decent price then it's packed with gut-sawing entertainment.